Why did Shilpa Shetty do such a post in the midst of Raj Kundra case, said- ‘There has been a mistake but…’ Shilpa Shetty’s husband and businessman Raj Kundra is in jail in a pornography case. After Raj Kundra’s going to jail, it has been a very difficult time for Shilpa Shetty. Although he has tried to normalize himself. Once again she is seen as a judge in the dance reality show. Meanwhile, Shilpa Shetty has shared a post on social media which has come into the limelight. Here he talks about mistakes.

Shilpa Shetty shares lines written by Sophia Loren. In which it is written that ‘mistakes are part of the dues that they pay for life’. On the page that he has shared, it is further written that ‘We cannot make life interesting without making some mistakes. We hope that the mistakes will not be dangerous so that other people get hurt but mistakes will happen. 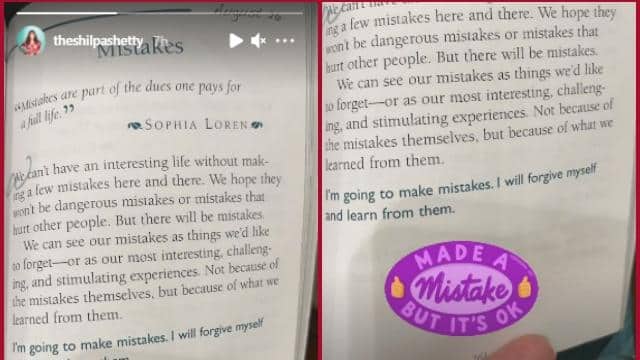 need to learn from mistakes

‘We can see mistakes as the things we want to forget or the ones that are most interesting, challenging and full of experiences. Not because we made mistakes but because we learned from them. I’m going to make mistakes. I will forgive myself and I will learn from them.

Shilpa has attached an animated sticker along with the page which reads – ‘Mistakes have been made but it’s ok.’

Earlier, Shilpa Shetty wrote in the caption on her Insta story- ‘Live every moment.’ Talking about the workfront, Shilpa’s film ‘Hungama 2’ has been released recently.