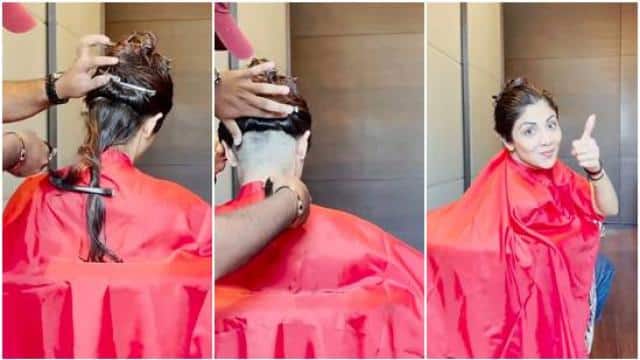 Bollywood actress Shilpa Shetty Kundra has been in the news since Monday morning for one of her videos. Shilpa Shetty’s new hairstyle (Shilpa Shetty undercut buzz hairstyle) is being discussed a lot, while some are liking it very much, while many social media users also called it fake. In such a situation, now by sharing a new video, Shilpa has stopped speaking of all the trolls.

And this is how it happened….
Shilpa recently shared a video on Instagram. In this video, Shilpa Shetty is seen taking a hair cut. It is clearly visible in the video that the hair below the back of his head is being trimmed with the trimmer. In the caption of this video, Shilpa wrote, ‘And this happened… Abdul Wahid was scared more than me.’

Shilpa’s Undercut Buzz Cut
Actually, earlier on Monday morning, Shilpa Shetty shared a video. In the video, Shilpa was seen tying her hair. Meanwhile, her undercut budge cut hairstyle is also visible. After this, Shilpa is seen doing exercises in the video. After this video went viral, some social media users had called it fake, so now with the new video, Shilpa has given a befitting reply to them.

Every day without taking any risk….
In the caption of her video, Shilpa Shetty wrote, “You can’t live every day without taking risks and stepping out of your comfort zone. Be it undercut buzz cut lena (it takes a lot of guts, won’t lie) or Then my new aerobic workout is ‘tribal squats’. It works all the muscles in the lower body, the coordination, speed and agility of the shoulders, arms and legs.”