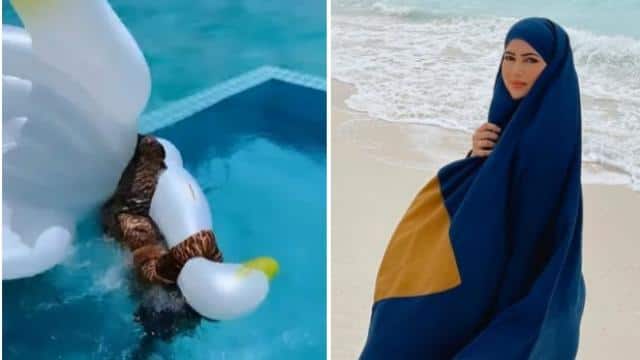 Film and TV actress Sana Khan has said goodbye to the entertainment industry last year. However, his popularity on social media remains intact. Recently he has shared a video of himself. In this, she is sitting on top of a floating duck in the swimming pool and suddenly her balance gets disturbed. The video is quite funny. Although her outfit has also caught the attention of the people.

sna’s balance disturbed by the wind

Sana Khan is visiting Maldives with her husband Anas Syed. She keeps giving updates of her trip on Instagram. His recent video is quite funny. Sana is in the swimming pool and she loses her balance and falls. Sana has written, look at the timing of my fall, on the nature of Allah. There was a lot of wind, so it is difficult to balance. Sana is roaming the Maldives

Sana Khan had announced to leave showbiz in the year 2020. After this she married Anas Syed. The footage of Sana’s wedding suddenly came on social media, due to which her fans were quite shocked. After this Sana herself shared pictures and videos of her marriage. After marriage, Sana went to visit Kashmir with her husband. Now she is in Maldives and is sharing beautiful pictures and videos from there.

Sana’s discussions were in Bigg Boss 6

Sana Khan has been a part of Bigg Boss 6. During the show, the news of his lesbian relationship with Aashka Goradia made headlines. After the show, Aashka and Sana had told that both are friends of each other. In the show, the scenes of both were deliberately shown in such a way that the attention of the people is attracted.

Share
Facebook
Twitter
WhatsApp
Previous articleTrolling Swara Bhaskar, the user said – Will the child be named Aurangzeb?… the actress replied
Next articleKangana Ranaut was seen in a bold look wearing a bralette, users trolled, said- ‘comments on others and herself’
RELATED ARTICLES
Entertainment