VIDEO: Kajol-Tanisha had an argument in Durga Puja, elder sister said – shut up, mother calmed down 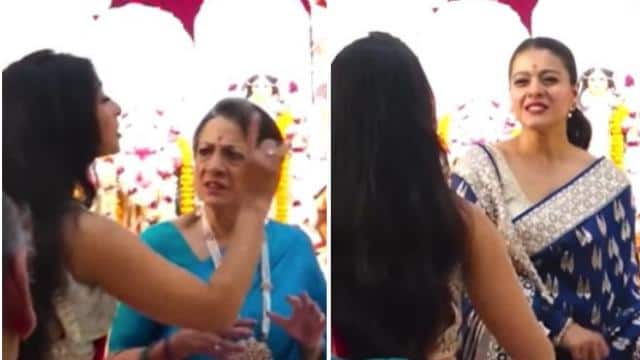 Kajol celebrates the festival of Durga Puja with great pomp. This time too the photos and videos of his family became very viral. Now a video has surfaced in which Tanisha and Kajol are seen arguing. Kajol calls Tanisha a ‘shut-up’. Meanwhile, Tanisha goes on to say something, on which her mother silences her.

The hesitation of both was caught on camera

During the past Durga Puja, many videos of Kajol surfaced. In a video, she was also seen crying after meeting her uncle. Now another video is going viral in which it seems that Kajol and Tanisha have an argument over something. Tanuja pacifies both of them. After this, all three pose, during which Tanisha also asks Kajol to stay a little away. She laughs, poses and says ‘Space’.

Many videos of Kajol surfaced

Apart from the sindoor khela, Kajol was also seen in the pandal for most of the days of Durga Puja. Kajol looked lovely in a traditional saree. One day she took her son Yug along with her in the worship. Kajol met her relatives and her emotional pictures and videos were also revealed. There were reports that after Corona, she met her family members after a long time. (Watch further video of Kajol-Tanisha’s argument)

On the work front, there were reports that she will be seen in Rajkumar Hirani’s next film. Although he had told during a talk with Hindustan Times, till now he has not approached me. I am listening and reading scripts and meeting people virtually for ideas. However, nothing has been finalized yet. Kajol had informed on Instagram that she will be seen in the film ‘The Last Hurrah’.