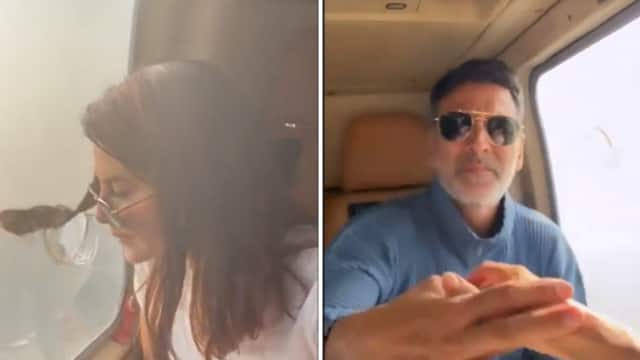 Akshay Kumar has shared a funny video of Jacqueline Fernandez. In this video, Jacqueline is seen curling hair in the air in a helicopter. Seeing his tricks, Akshay has called Jacqueline a jugaad. Also, ladies have been asked to learn this hack. The two are working together in the film ‘Ram Setu’. Both had a lot of fun while going for the shoot. Jacqueline has also uploaded Akshay Kumar’s video clip on her Instagram story.

Akshay Kumar uploaded the video and wrote, Ladies, there is a hack for all of you, Courtesy Jugadu Jacqueline. Watch and learn how hair hanging in the air can be curled in a helicopter. In the video shared by Akshay, Jacqueline was really seen curling her buns from the air.

At the same time, Jacqueline has shared a clip of Akshay Kumar on her story. In this, Akki is seen looking out of the helicopter. Then she asks him whom we are going to shoot. Akki replies Ramsethu and starts snatching the camera from Jacqueline.

Fans are waiting for the film Ramsetu

The shooting of Akshay Kumar Jacqueline Fernandez and Nushrat Bharucha starrer film Ram Setu is going on. Some part of the film was shot earlier. In between, the shooting had to be stopped due to Corona Second Web. There was news of many artists being Kovid positive on the set. At the same time, Akshay Kumar also got corona. The director of the film is Abhishek Sharma. Akshay Kumar is playing the role of Archaeologist in this.

Share
Facebook
Twitter
WhatsApp
Previous articleA horrific accident happened to Nora Fatehi during the shooting of the song ‘Kusu Kusu’, said – someone dragged her with a rope around her neck.
Next articleTo meet ex-wife Reena Dutta, Aamir Khan adopted such an attitude that he became a troll, people said – the effect is…
RELATED ARTICLES
Entertainment