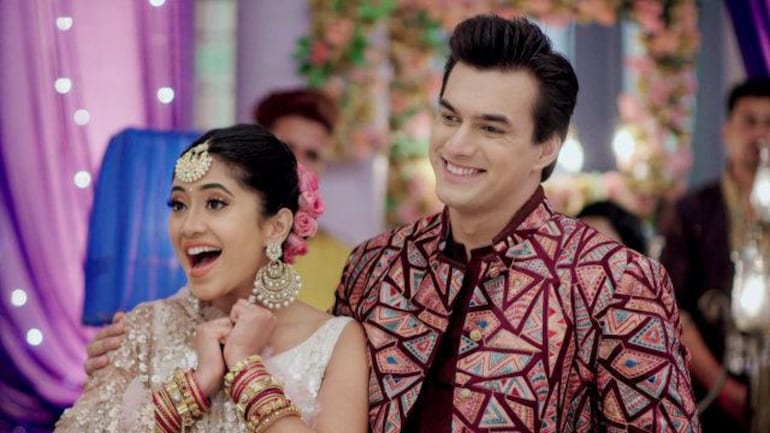 
Yeh Rishta Kya Kehlata Hai 17th August 2021 Written Update starts with Kartik. He suggests Sirat sleeping on the bed while he will sleep on the sofa. Sirat thinks to put some cushions beneath the sofa so that Kartik doesn’t get hurt if he falls down the sofa. The next morning Kartik wakes up to find pillows on the floor. He smiles and looks for Sirat. Kartik sees that Sirat is feeding Kairav. He notices some food on his face. He gently removes it. Kartik smiles looking at Kairav ​​and Sirat and hopes that their fake marriage turns real.

Later, Kartik notices the boxing gloves covered in dust. He cleans it. Sirat enters the room and sees him cleaning the gloves. After that, Kartik informs her about Ranvir’s doctor and tells her that he is returning after a total of six months from Australia. Kartik says that he will fix a meeting with him and will find ut the truth about the reports. He assures Sirat that he will prove that the reports are fake and Sirat is not guilty while they will do their best to look for the real culprit.

Kartik asks Sirat if she is determined to teach Chavan a lesson as she is the hope of all the girls. He asks if she is ready to remove the stains from her name. Sirat wears the gloves and begins boxing and nods. Later, Sirat pulls Kartik into a hug and thanks him for bringing her motivation back and for encouraging her. She angrily announces that she will leave neither Anuradha nor that Chuhan. Kartik smiles and asks her not to let her anger cool down. Sirat looks determined and tells Kartik that they will surely emerge out as the winner this time no matter what.

In the next scene, Daddy exclaims that has to do a ritual which is to provide strength to the married couple’s relationship. Kairav ​​wonders that Kartik and Sirat are not even married so it would not be fair to do the Rasam. He tells everyone that the said ritual is quite boring and that they should do a Sangeet ritual. Later, Kartik and Sirat reach the boxing club where the former asks Sirat to only focus on her training and nothing else. However, the manager refuses to let her get training in the club due to the murder against her. Kartik gets shocked. Follow for further updates.