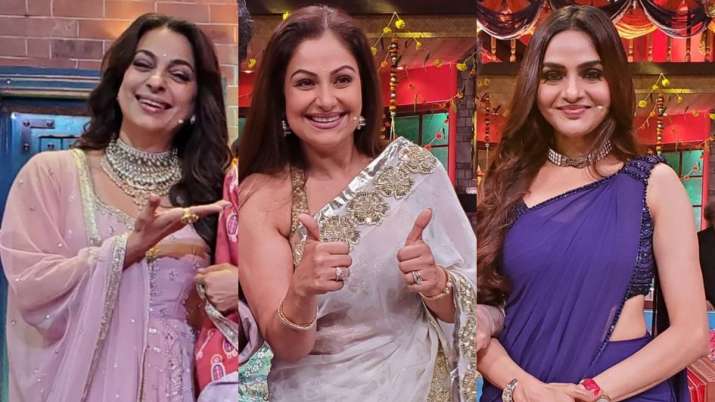 Hey entertainment lovers, The Kapil Sharma Show is back to make your weekend over the top through the 17th October 2021 episode, where the viewers are going to become a witness of the precious presence of B-Town’s queen Juhi Chawla, Ayesha Jhulka, and Madhoo . So you can suppose how would the episode is going to be bang because their fans are eagerly waiting for the broadcasting because no one would like to miss the episode. So just gearing up yourself to catch such a phenomenal episode, get to know more check the details given below.

The recent episode commences where Kapil Sharma welcomes the actress while singing her song “Tu Mere Saamne” and she gets glad to see such a warm welcome. Something similar he does with the rest of the two actresses while singing their blockbuster songs like “ Pehla Nasha” for Ayesha Jhuka, and “Maine Pyaar Tumhi Se Kiya Hai ” for Madhoo. All three actresses set the stage on fire as well. So as everyone is acquainted with Kapil Sharma that he loves to play a rapid-fire and “post ka postmortem”. So several enthusiastic secrets are waiting for you, that will make you entertain you to the next level.

While the rapid fore round the viewers will be acquired with the relationship between Juhi Chawla & Madhoo that these are real sister-in-laws. Because Actress Madhoo married Juhi Chawla’s brother-in-law, uncounted fans did not know it hitherto but due to Kapil Sharma, another secret of the actress has been revealed. At the same time, he asks Ayesha that her song Pehla Nasha has filmed in the slow-motion effect so did she enjoyed that because till now no song can beat the feel of the song, she replies yes because it was a revolution in the Bollywood world in the 90’s era.

Later, Kiku Sharda will put the four moons on the stage through his sense of humor while portraying a character. He asks actress Ayesha that would she like to blow in the glass because he wants to check that her intoxication has been removed now or not because it has been around two decades since to shoot the “Pehla Nasha” song. Meanwhile, Krushna Abhishek will take place as Jackie Shroff and does such things that will make you giggle for sure. So do not miss streaming it on Sony Television at 09:30 PM and for more details stay connected with us.