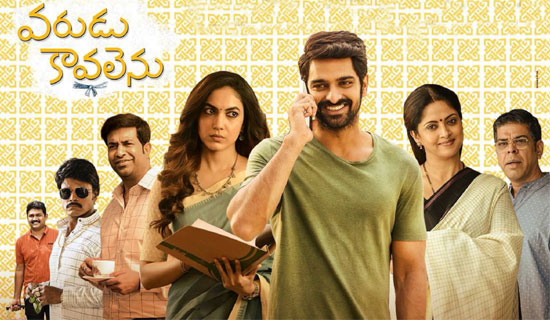 Post lockdown, makers are back in the business as they have been introducing back to back films in theaters. Recently, Varudu Kavalenu was released in theatres. No doubt, the film has been doing good and has also been getting positive responses from the viewers all around. However, some people are still confused about giving the film a try or not. Well, it’s obvious that one likes to go through the review and ratings first before choosing any particular movie to watch, be it in theaters or online. Here, we are providing you with the details of the box office collection of the said film.

Released on 29th October 2021, the Indian Telugu-language film features Ritu Varma as Bhoomi and Naga Shaurya in the character of Aakash. They are playing the lead role in the film while Nadhiya, Murali Sharma, and other actors are playing other pivotal roles in the movie. It has been made under the direction of Lakshmi Sowjanya while it has been edited by Navin Nooli. Vishal Chandrasekhar is the music director of the film. Filled with so many talented cast and crew, the south movie managed to attract the audience in a very short span of time.

The lead actors’ chemistry is the highlight of the whole film. Their connection and the bond in the film has impressed the viewers who have been visiting the theaters. Now, coming to the box office collection of Varudu Kavalenu, the movie has survived 4 days in the theaters so far. So, in the span of four days, the movie collected Rs 2.78 crores INR in total. The figure belongs to the income made by the film in the Telugu state in the last four days. Talking about the area wise collection, in Nizam, it collected 95 lakhs while it earned Rs 35 L in Ceeded.

In other areas such as UA, East, West, Guntur, Krishna, and Nellore, the Telugu movie collected 34 lakhs, 23 lakhs, 19 lakhs, 29 lakhs, 25 lakhs, 25 lakhs, and 18 lakhs respectively. It won’t be an exaggeration to state that the film is really doing good in theaters and have been getting great feedback from the viewers who headed to the cinemas to enjoy the film. Made under Sithara Entertainments, the romance comedy had gotten 7.5 ratings out of 10 frim IMDb which itself states how good the film is. The light-hearted comedy filled with sweet romance film can be given a try. Stay tuned for more updates on Varudu Kavalenu.

Share
Facebook
Twitter
WhatsApp
Previous articleShahrukh Khan did not appear on the birthday this time on the snacks sent from the fans, this was the reason
Next articleNajaa Song: Akshay Kumar in the mood of romance in the new song of ‘Sooryavanshi’, Katrina Kaif punched
RELATED ARTICLES
Tv Serials Updates