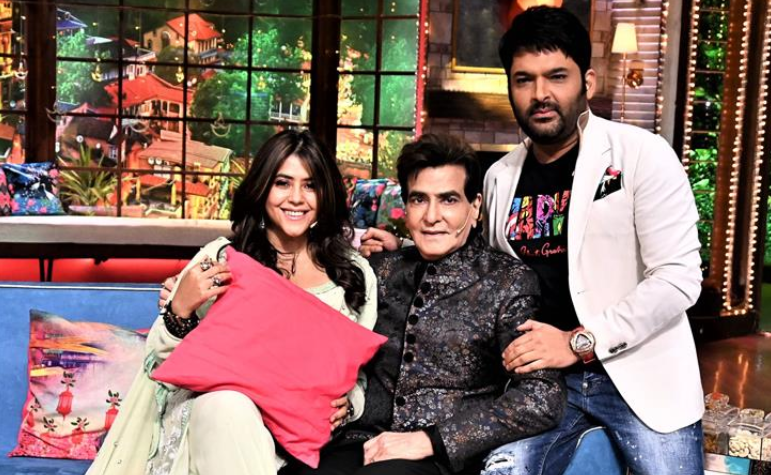 In the upcoming episode of the popular comedy-chat show The Kapil Sharma Show, we will see the legendary Jeetendra arriving with his daughter and telly soap queen Ekta Kapoor. The promos have been circulating the social media already and the fans can’t seem to hold their excitement. The duo will be seen gracing TKSS in Saturday’s episode, on November 6, 2021, which is undoubtedly going to be filled with laughter and comic skits. Although the promos are out, fans are still thrilled to know more about the upcoming episode and what’s going to happen there. Take a look at the article below to find out about it.

The interesting episode having the special guests Jeetendra and Ekta Kapoor will start with Kapil welcoming the duo with love and pleasure. Sumona who has played several kinds of characters in the show will perform the role of Bhuri. She will be seen inviting the special guests to her newly opened ‘Hotel Chill Palace’. As usual, Kapil will not leave any chance to embarrass Sumona aka Bhuri and will pull her leg from time to time. The guests will really enjoy Sumona’s performance. Later, Kiku Sharda and Krushna Abhishek will come.

The duo will be dressed up as Sunny Deol and Dharmendra sequentially. Playing the father-son role, Krushna and Kiku will be able to tickle the audience along with the guests. Besides mimicking the popular actors, the duo will also be seen having fun with a fake snake that they have carried along with them. After their fun-filled performance, Chandan Prabhakar aka Chandu will appear. His appearance only will add to the fun quotient. Undoubtedly, all the characters along with the stand-up comedian Kapil himself will look forward to entertaining the audiences as well as the guests.

Apart from the performances, Ekta and Jeetendra will share some interesting and unheard stories from their personal and professional lives. Telly Soap queen Ekta Kapoor will tell how their family hold the popular lyricist, poet, and director, Gulzar in high regard. She reveals that belonging to a Punjabi family, she is not allowed to touch any elder’s feet and seek blessings from them. Ekta adds that her mother Shobha Kapoor has allowed her to touch Gulzar, which is the only exception for her. She also revealed that Gulzar remembered her by her pet name. Overall, today’s episode of The Kapil Sharma is going to be filled with unlimited fun and never-ending laughter moments. Watch TKSS on Sony TV at 9:30 PM.