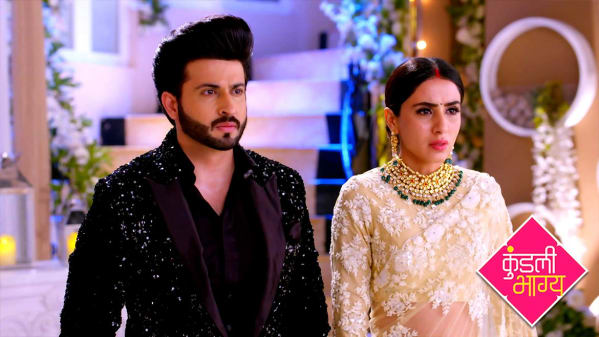 
The upcoming episode of Kundali Bhagya will start where Prithvi gets romantic with Kritika meanwhile, he says that it can not be called romance as she wants. Kritika gets shy and asks him to be ready on time because they have to reach the function venue at the correct time. Inwardly Prithvi thinks that whatever is going on between him and Kritika it is becoming a Triangle story because Sherlyn loves him too. Another side, Sonakshi is enjoying her “Haldi Function” and at the same time courier boy arrives along with Preeta’s medical reports.

After seeing him Kareena is getting scared by thinking that if whatever Sherlyn has told her comes true then everyone’s heart will be broken. Therefore she is afraid of the consequences of her reports, so she must do such things to prevent her family from this trauma. Then Kareena asks Preeta to take care of her because they are here to fetch the reports, at the same time, Archala takes them and rushes upstairs. Preeta also tries to rush but Kareena stops her meanwhile, Sherlyn says that Preeta knows everything about her pregnancy therefore she is rushing, but Kareena asks her to stop pardon it.

Then Sherlyn calls the courier boy and asks to whom he gave the reports, he replies he gave it to someone else, she screams and rebukes him too. At the same time, Both Sherlyn and Kareena want to figure out the name of the receiver, because only the reports can reveal the truth. Another side, Bani and Kritika cross the way and spontaneously sees Karan and Preeta together while romancing. But Kareena is worrying by thinking that Rakhi and Mahesh should not get this, no matter what happens.

After a while, Sherlyn catches Archala and asks about the reports, and she replies that on the table she will get that. At the same time, Preeta and Karan are dancing and enjoying the function where Karan assures her that he will be the world’s best husband. But suddenly Preeta falls down and rushes from there and the entire family gets shocked to see her. Because it’s not good for her pregnancy, Karan also follows her because he wants to get his answer. Meanwhile, Shelyn gets envelop only and thinks who took the reports, so do not miss to stream it on Zee TV at 09:30 PM and for more updates connect with us.