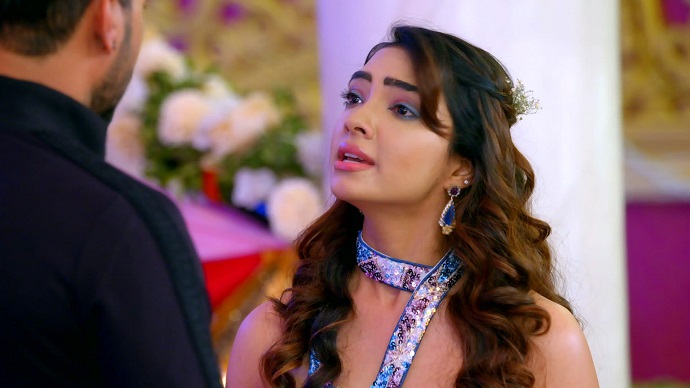 The latest episode of Kumkum Bhagya begins with Rhea waking up thinking that last night was amazing as she was with Ranbir. She looks around while she hears the shower noise she thinks that it must be Ranbir and smiles. Rhea cuddles his jacket and dials Aaliya’s number where she tells her that her trick has worked as she has applied and got the result and whatever she wanted to happen has happened. Aaliya asks her what happened, she replies that she spent all night with Ranbir and that too on the same bed, Aaliya congratulates her.

Rhea thanks her smiling, Aaliya then tells her that now she has to follow the next step of Ranbir and Prachi’s separation. Rhea nods saying that now she will tell Prachi about her night with Ranbir, Aaliya stops her doing this and says to come home and listen to the plan first after coming home as she will teach her what to do. Rhea hangs up the call. Next day everyone comes home back where Pallavi opens the door and just after opening the door she tells Rhea that she was not expecting this from her and never thought that she can go this cheap just to get Ranbir.

Rhea asks her that what she is talking about and what she has done. Pallavi asks her if she doesn’t know what she is talking about and she didn’t do anything wrong. Meanwhile, Prachi goes from there and asks her that what they are speaking of? Aaliya comes there as well, Prachi looks at her and smiles saying “you are here Bua Ji”. Aaliya hugs her and apologizes, Prachi asks her why she is saying sorry to her. Rhea smiles weirdly. Prachi looks on. Aaliya then tells her that whatever has happened just forget because it happened behind her.

Prachi requests them to say clearly whatever they are saying because now she is getting worried thinking about scenerios.Dida comes there and asks Prachi if Ranbir and Rhea didn’t tell her about the incident. Prachi asks them that why everyone is behaving strangely, she tells them that first Ranbir was super excited to go on honeymoon but don’t know why he started to chant let’s go home back. However, the audience keeps watching the episode where Rhea’s reality is yet to be revealed so stay tuned with us to get all the complete and latest written episode udpate.

Share
Facebook
Twitter
WhatsApp
Previous articleDiscussion of Shilpa Shetty’s new hairstyle, people said – went to Tirupati to get hair removed, wore a wig
Next articleSardar Udham got so many ratings on IMDb, Vicky Kaushal said – ‘You all made a fuss’
RELATED ARTICLES
Tv Serials Updates