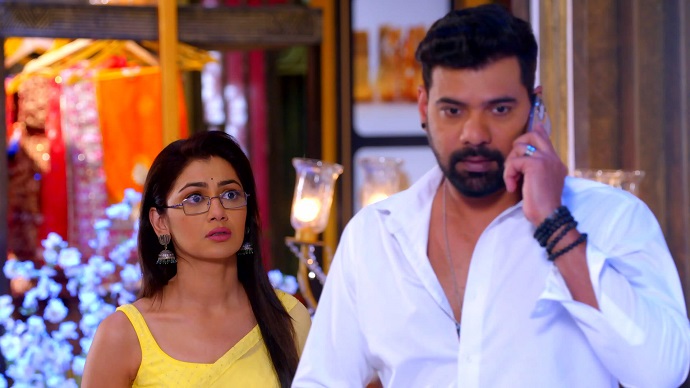 
The latest episode of the show begins with, Pallavi talking to Prachi and Rhea and telling that Rageshwari is the chairperson of the Rageshwari foundation and she is coming here today. Pallavi also tells that she will give them traditional sarees and also some matching jewelry with them. She gives the attire to both and says that she wants Rageshwari to like them both because both are Kohli’s daughter-in-laws, She leaves saying she wants them to look adorable. Teji comes there and says they have to look traditional to get the keys.

There, Sushma comes to Gaurav’s home and hands out towards him and slaps him tightly. She says angrily to him that his father used to work with them and he did it for a while and also made mistakes because it’s a human behavior but he used to apologize whenever he did something bad. She says him that he is not like his father because first, he did the mistake and still not feeling bad or guilty for that. She asks him that how can he be like this. Gaurav replies that her daughter wanted to kill him and for this, she took the knife in her hand. She replies that her daughter was defending herself and instead of being thankful to her, he is pretending like he has not done anything. He asks her why he should be thankful towards her, she says that what he did her daughter should file a case against him but she did not do this.

She then tells him that even Pragya has terminated her company’s partnership with him and still he is pretending like he is something. He replies that he did not sign any papers. Sushma replies that now her daughter will sell each and every asset as she has the chance to do this. He repeats that he has not signed any papers, Sushma tells him that he has signed the papers when he was intoxicated. He replies that Pragya just can’t do this. Sushma says that Pragya is doing the same she is giving his shares to a charity today at 3 PM and it will be announced through a press conference.

She threatens him and slaps him as well. Meanwhile, Mr. Thapar comes and also slaps him and says that having trust in him was the biggest mistake of his life because he is way worse than Gautam. Suddenly Aaliya comes there and tries to talk to him. Gaurav looks at her and asks Sushma, who is she? Sushma replies that she is Abhi’s sister Aaliya Mehra. He shoves her out, she says that she is the only one who knows about Pragya and that too very well and she has a plan to ruin Pragya. She then tells him that she also hates her more than anything and hands out to shake hands saying the enemy’s enemy is called a friend. The episode ends here to know what happens next so tune in to ZEE TV tonight at the right time.