Sonu Sood will get 20 percent discount on these slippers in Kashmir! Watch this funny VIDEO 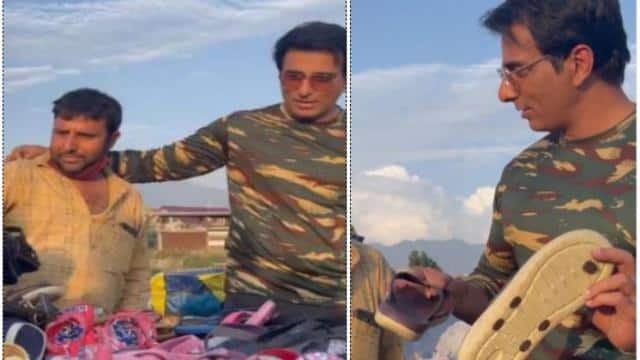 A video of Bollywood actor Sonu Sood is becoming very viral on social media. In this video, Sonu Sood was seen promoting a shopkeeper’s shop selling shoes and slippers on a roadside cart. The actor himself has shared this video on his Instagram account.

Sonu Sood will get 20 percent discount on slippers

While sharing the video, he writes, ‘Our sandal showroom, 20% off in my name’. In the video, Sonu has named this salesman as Shamim Khan. In the same video, Sonu praising all the slippers on the stall and asking for their price, then he is surprised to know that the price of these slippers is only 50 rupees for all the age group people. In the video, Sood asks Salim about giving discount on slippers in his name, then Salim says in response that we will give 20% discount to anyone who comes here in your name.

For your information, let us tell you that this video of Sonu is from Batmaloo in Srinagar. Where these days he is shooting for his upcoming film ‘Neeti’. This film is a film based on Jammu and Kashmir. The announcement of this film was recently announced by Lieutenant Governor Manoj Sinha.

Before this video, Sonu Sood also reached among the army personnel in Kashmir and was seen encouraging them. Sonu has shared a video on his Instagram, in which he was seen spending time with the soldiers.

Very active on social media. Every day he keeps sharing something or the other with his social account. A song by Sonu ‘Saath Kya Nibhaoge’ is going to release on 9th August. Sonu is going to be seen with Nidhi Aggarwal in the video of this song. This song has been shot in Punjab. The song is sung by Tony Kakkar and directed by Farah Khan.