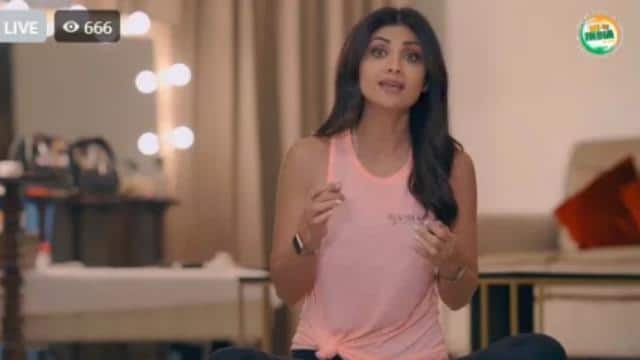 Raj Kundra is in jail for making and showing pornographic films. After her arrest, users on social media also trolled Shilpa Shetty. She was judging a dancing reality show, she distanced herself from there. Shilpa Shetty has appeared in public for the first time after the arrest of Raj Kundra.

Shilpa is associated with ‘V of India’ as a Kovid-19 fundraiser, under which she appeared live on social media on Sunday. During this, Shilpa told about Yoga. Shilpa says that ‘we are living in a time where everything is dependent on breathing or breathing. Breathing is the only way through which we can secure our entire system. If your nasal passage is cleaned, then oxygen will be able to reach your brain cells better and your immunity will be better.

Shilpa told how to fight negative thoughts in today’s time. She says that ‘It is natural to have negative thinking in difficult times, but to control it, it is very important to have a dimension (breath control) on prana. Because of this, in today’s time, pranayama has become more important than ever in order to correct your breathing to stay positive.

In the end, Shilpa said that ‘I hope Pranayama will benefit your immunity and health in your everyday life.’

Earlier, Shilpa Shetty had issued a statement on social media saying- ‘Yes, the past few days have been very challenging in every way. There were many rumors and allegations. The media made many unfair allegations against me and (not so) well wishers too. A lot of trolling/question was raised… not only on me but also my family. I haven’t put my side till now… and I will continue to do so in this case as it is under consideration, so stop giving false quotes from my side.’