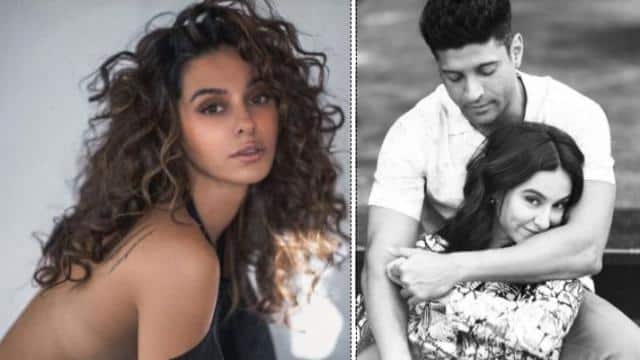 Bollywood actress-model Shibani Dandekar is celebrating her 41st birthday today. On this special occasion, she has given a special surprise to her boyfriend actor Farhan Akhtar. So on the other hand, Farhan has won her heart by giving a full message for his love lady.

Shibani got Farhan’s name tattooed on her neck

Shibani Dandekar has shared a photo from her Instagram story giving a surprise to Farhan Akhtar. In this photo, Shibani is seen flaunting a tattoo of her love boy Farhan’s name on her neck. Looking at his tattoo, it seems that he has got it done just recently because the tattoo on his neck is still looking red and fresh. The love shown by Shibani towards Farhan has gone viral on social media. After Shibani Dandekar’s post, Farhan Akhtar has congratulated Shibani on her birthday by sharing a romantic throwback photo with her. Along with this, Farhan has also written a full message for his love lady, which is being liked by the fans. Along with the red heart emoji, Farhan wrote in the caption, “With all my heart… Happy Birthday Shu. I love you.” Commenting on Farhan’s post, actor Hrithik Roshan and Farhan’s sister and director Zoya Akhtar have wished Shibani a birthday.

Shibani-Farhan are dating each other for three years

Let us tell you that Farhan Akhtar is dating Shibani Dandekar since 2018. The two first met on the sets of the TV show ‘I Can Do That’, which was hosted by Farhan-Shibani. Both fell in love on this set and after a long time made their love official through social media. Today it has been 3 three years dating each other.