Saira Banu has been sending food to the poor on behalf of Dilip Kumar for several months, Amitabh Bachchan also remembered this 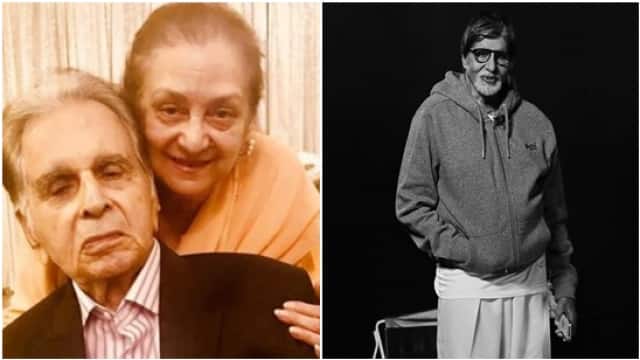 Actor Dilip Kumar, who was called the Tragedy King of Bollywood, said goodbye to this world on July 7, 2021. Dilip sahib was ill for a long time and had he been alive today, he would have been celebrating his 99th birthday on Saturday. On the 99th birth anniversary of Dilip Kumar, he was remembered by all the fans and stars. On the other hand, Dilip Kumar’s wife Saira Banu looked very emotional on this day. Saira Banu said that after Dilip’s departure, a huge void has been created in her life. Along with this, the emperor of Bollywood Amitabh Bachchan also remembered Dilip Kumar.

will live forever sir
Actress Saira Banu remembers actor Dilip Kumar, saying her late husband will always be there for her. Bano said Dileep’s not being physically together has created “a huge void”, but she still feels that her husband is with her every step of the way. Saira told ‘PTI-Bhasha’, ‘I will pray, I will remember him. I want to go to Juhu Garden (Juhu graveyard) where he (buried) is.’

There’s a big emptiness
Recalling the earlier birthdays of Dilip Sahab, who had spread his magic of acting in great films like ‘Mughal-e-Azam’, ‘Devdas’, ‘Naya Daur’ and ‘Ram Aur Shyam’, Bano said that India would celebrate his birthday. And his fans from all over the world sent him wishes and the house was filled with flowers and colorful bouquets. Bano said that Kumar got a lot of love from the people. He said that Sahab was a lively person and was very fond of food, he liked to wear simple clothes and play. Bano said that after Kumar’s death, a huge void has emerged.

Saira sending food to the poor
Along with this, Saira Banu told that she has been sending food to the poor on behalf of Dilip Sahab for several months. It is often said that time heals every wound, but Bano said that without his “sahib”, his life has become unimaginable. Please tell that Bano used to call Kumar affectionately as Sahib. Saira said, ‘I am trying to keep myself healthy. You can imagine how difficult it is. This is a big blow. I really don’t know how long it will take for me to recover from it or whether I will be able to recover from it or not.

I’m lucky to have lived with them
Bano, who had worked with Dilip Kumar in a few films like ‘Sagina’, ‘Bairang’ and ‘Gopi’ before her marriage in 1966, said that the memories of the five decades spent with Kumar are his support. Saira said, ‘(I think) he is walking hand in hand with me. All I think is that she is here and that’s how I want to live. It is unimaginable for me to walk without them. We have spent life together. We have been together 55-56 years. Every marriage has its ups and downs, but we had a great time together. He helped me a lot in my life. It is my good fortune that I have lived with him. He will always be in my memories. He will live forever for me.’