Priyanka Chopra Jonas injured during the shooting of ‘Citadel’, fans were upset after seeing the injury, photos viral Bollywood’s ‘Desi Girl’ Priyanka Chopra Jonas continues to shine in Hollywood as well. These days Priyanka is busy in the shoot of Citadel. In such a situation, Priyanka has shared some pictures on Instagram Story, seeing which the fans have been surprised.

Priyanka’s insta story
Actually Priyanka recently shared two pictures in Insta Story, in these pictures Priyanka’s face is showing blood and bruises. In another picture, Priyanka told that while the blood on her forehead is makeup, on the other hand the cut on her eyebrows is real. That is, Priyanka has been injured during the shoot. 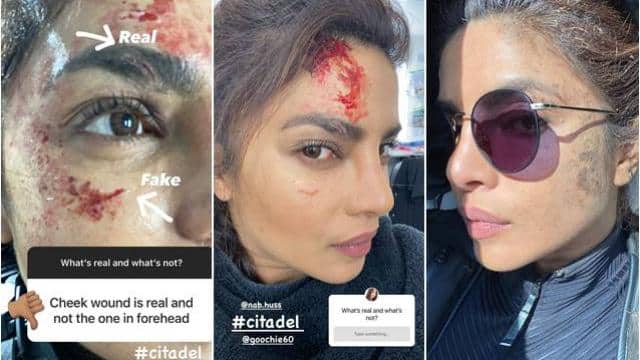 Social media users reactions
Priyanka’s Insta stories are becoming increasingly viral. Fan pages are increasingly sharing these pictures of Priyanka, while Priyanka’s fans are also saluting her spirit on the one hand and advising her to take care of herself on the other hand. Remind that even before this, pictures related to Citadel were shared by Priyanka. Let us tell you that Richard Madden and Pedro Leandro will be seen with Priyanka in the film Citadel.