Nusrat Jahan smiled as the bud of Kashmir in the beautiful plains, the caption of the actress caught people’s attention 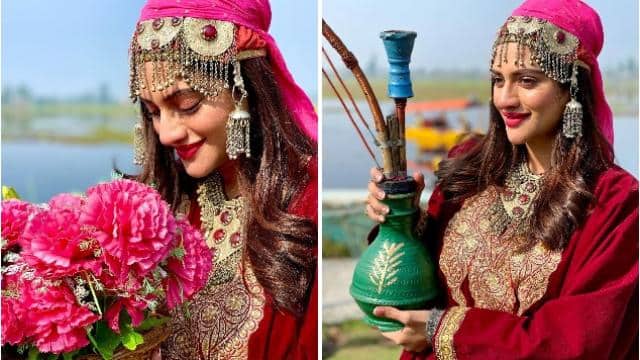 Bengali actress turned TMC MP Nusrat Jahan has shared her very beautiful photo on her Instagram, in which she is seen as ‘Kashmir’s bud’. While sharing this photo, the actress has told that all these pictures have been clicked by her boyfriend actor Yash Dasgupta.

Credit to Dasgupta given in the caption

Sharing her new photo on Instagram, Nusrat Jahan wrote in the caption – Kashmir ki Kali-PC (Photo Credits) Dasgupta. Along with this, he has also shared many emojis.

Before this romantic video went viral

For your information, let us tell you that Nusrat Jahan, along with Yash Dasgupta, has been in the limelight in Kashmir these days. Recently, the actress shared a video, in which both were seen holding each other’s hands on the boat. However, the faces of both were not shown in the video. Now after sharing the romantic video, the actress has shown her Kashmiri look.

Now talking about the look, you can see that in the first and second photos, she is smiling with flowers in her hands. In the third photo, she is looking at the side with a hookah in her hands. Pink lipstick on the lips, glowing highlight makeup and brown eyebrows are making her look perfect. She looks even more adorable in a red suit wearing a pink cashmere chunari on her head. In the photo, she really looks like a Kashmir bud.