Kriti Sanon showed the video of her blue-eyed ‘son’, said – I wanted him to love me 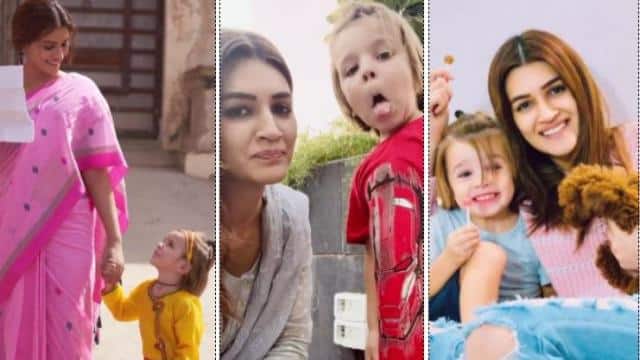 Bollywood actress Kriti Sanon ‘Mimi’ was released recently. In this film, Kriti has managed to win the hearts of the audience by playing the role of a surrogate mother. Pankaj Tripathi appeared in the lead role with him in the film. Kriti is being praised everywhere for Mimi. At the same time, Kriti is also very happy to play the role of surrogate mother. Meanwhile, Kriti has shared a special post for her reel life son Raj (Jacob) from her Instagram account. Along with the post, she has shared a video of several clips, in which she can be seen having fun with Jacob and showering love on him.

A lot of love expressed for Jacob in the video caption

Sharing this video, Kriti has called Jacob her ‘blue-eyed son’. Recalling the moments spent with Jacob, Kriti wrote in the caption, ‘When I was preparing for Mimi, I knew Mimi and Raj had a very special relationship.. She was his best friend, and she Everything was there for him.’

Jacob said I love you Mimi…

Kriti further writes, “I wanted Jacob to love me and be so comfortable with me that he would find me after his parents on the sets! He knew me as Mimi and not as Kriti…. I became a baby with him when he opened his arms! I remember the day he randomly said “I love you Mimi” and my heart just melted! What a wonderful kid..I love you Jacob!

Kriti Sanon was seen having fun with Jacob

In the video you can see how happy Jacob and Kriti are to be comfortable with each other during the shooting of the film. After shooting in the video, Kriti can be seen playing hide and seek, riding with Jacob. This post of Kriti Sanon has been covered on social media. Kriti has also shared Jacob Khas photos with this post.

After the film Mimi, Kriti Sanon has many more films. Kriti will be next seen in ‘Bhediya’ with Varun Dhawan, ‘Adipurush’ with Prabhas, Saif Ali Khan and Sunny Singh, ‘Bachchan Pandey’ with Akshay Kumar and ‘Ganpat’ with Tiger Shroff. Huh.