KBC 13: Why did John Abraham as strong as Steele cry in front of Amitabh Bachchan? 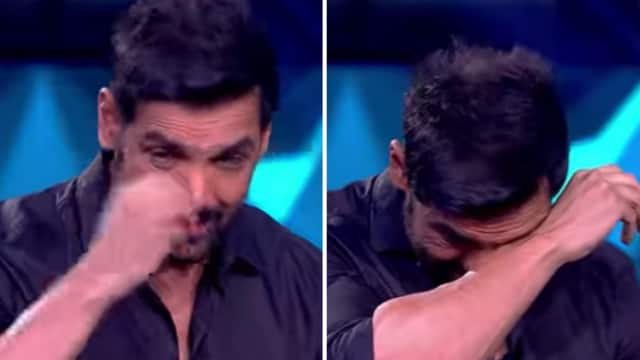 The emotional teaser of Kaun Banega Crorepati 13’s grand Friday has been released. John Abraham is seen crying in this. John had arrived on the show along with Divya Khosla Kumar for the promotion of the film ‘Satyamev Jayate 2’. During this, John Abraham was seen having a lot of fun with Big B. He also recalled a visit to Big B’s house. At the same time, in the last of the promo, he was seen crying and wiping tears. Amitabh Bachchan also looked upset seeing him.

John had a blast with Big B

Kaun Banega Crorepati has a special Friday episode. Celebrity guests come in it. In the coming Friday, John Abraham and Divya Khosla Kumar will sit in the hot seat opposite Amitabh Bachchan. The channel has released the teaser of this episode. In this, John is seen doing some action scenes. After that he does football tricks. After this Big B also tries to swing the ball on the finger and does not succeed.

John lifts his shirt and shows it to the audience. When the audience cheers for him, Amitabh Bachchan says that only the voice of women was heard. John also remembers an old thing when he went to Amitabh Bachchan’s house. He says, after Dhoom, I came to your house on a motorcycle and you said, don’t anchor Abhishek. When Abhishek came down, you immediately changed the track, wow what a bike. After this John Abraham was seen crying. Seeing him, Divya Khosla Kumar and Amitabh Bachchan also looked upset. However, the teaser did not reveal what made John emotional.