Kapil Sharma ‘stacked’ in front of John Abraham, then comedian showed his ‘stardom’, had fun with Divya Khosla 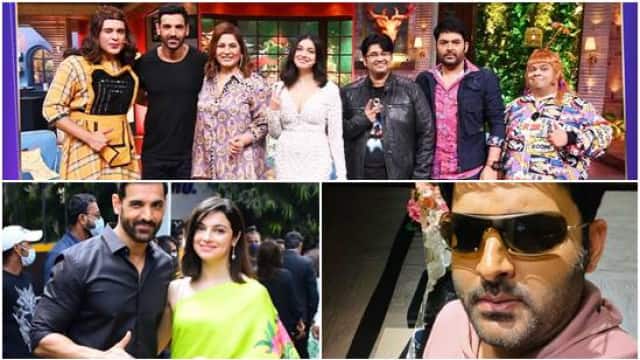 Celebs often come to promote their films in ‘The Kapil Sharma Show’. In such a situation, this time Divya Khosla Kumar, Milap Milan Zaveri and John Abraham arrived on the show to promote the film Satyameva Jayate 2. During this, Kapil Sharma had a lot of fun with the cast, whose promo videos are going viral on social media.

show promo viral
Actually Sony TV has shared some promos of The Kapil Sharma Show on its social media, which the audience is very fond of. In a promo, it is seen that John Abraham and Kapil Sharma are doing pushups together, but Kapil piles up in front of John. Everyone laughs seeing that.

Kapil asks for fitness tip from John
Along with this, it is seen in the promo that Kapil Sharma asks John- ‘If a man wants to lose five kilos in a month, what should he do?’ On this John asks- ‘You have to do it.’ On this Kapil says- ‘Yes, I am that one man.’

Kapil’s stardom
After listening to Kapil, John further says- ‘After the show I will make you a diet chart, if you follow it properly for a month then your weight will be reduced.’ After this Kapil jokingly says, ‘Look my stardom, John Abraham is my dietician.’ Everyone laughs after hearing this from Kapil.

Satyamev Jayate 2 to release on November 25
In the promo, Kapil Sharma is also seen having fun with Divya. Let us tell you that Kapil Sharma always wins the hearts of the audience with his comedy. The celebs of Kapil’s comic timing are also fans and often everyone enjoys coming to Kapil’s show. Talking about Satyamev Jayate 2, the film will be released in theaters on November 25.