Kapil Sharma made fun of Taapsee Pannu about Akshay Kumar’s name, after hearing the actress said – I will not take it out 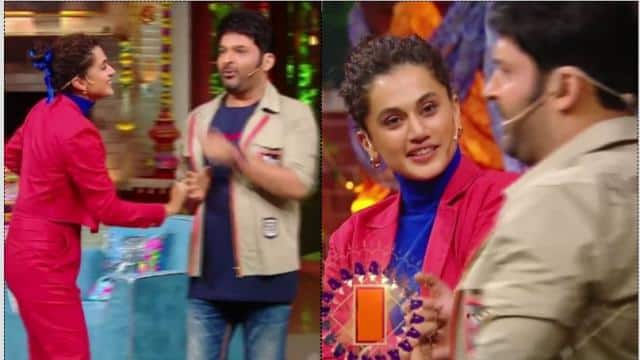 Bollywood actress Taapsee Pannu’s upcoming film ‘Rashmi Rocket’ is set to release on Zee5 on October 15. Earlier, the actress is busy promoting her film. Soon Taapsee is going to attend The Kapil Sharma Show to promote. On the show, Taapsee will have a lot of fun with Kapil Sharma and the team and will share the experience of doing her upcoming film. A promo of the show has surfaced, in which Kapil is seen making fun of Taapsee and telling how Taapsee kicked Akshay Kumar out of the film and now how she will take out Archana Puran.

Kapil made fun of Taapsee by taking Akshay’s name

In this promo video released from Sony TV, you can see that Kapil reveals that Taapsee first did the film ‘Baby’ with Akshay Kumar and took the character Shabana. After this he dropped Akshay Kumar from the entire film ‘Naam Shabana’. After that he made this rocket with Akshay of ‘Mission Mangal’ and he himself again made Rashmi rocket and fired Akshay Kumar again and now….

Taapsee will not throw Kapil out of the show

Hearing this from Kapil, Taapsee says that I will not take you out. On this Kapil Archana pointing to Puran Singh that I am talking about him. Archana Puran Singh bursts out laughing at this jugalbandi of Kapil and Taapsee. Let us tell you that along with Taapsee, Supriya Pathak and actor Priyanshu Painyuli will also be involved in this show.

‘Rashmi Rocket’ is directed by Akarsh Khurana and the film is co-produced by Ronnie Screwvala, Neha Anand and Pranjal Khandadia. The film stars Priyanshu Painyuli as Rashmi’s lover, Abhishek Banerjee as the lawyer and Supriya Pathak as her mother. Taapsee Pannu has taken very hard training for this film. The way Taapsee Pannu has molded herself into her character, she looks like a complete athletic. Taapsee looks stunning with her body, demeanor and on-field action.

Releasing on Zee5 on October 15, ‘Rashmi Rocket’ features Taapsee Pannu as the player Rashmi, who hails from a small village. Although she becomes a successful athlete with her hard work, she is suspended after failing the gender test. A few days back, Taapsee also shared a video of her prep session for the film on her Instagram. Seeing the strong dialogues and superb acting skills of Taapsee Pannu in the trailer of the film, the audience has high expectations from this film.