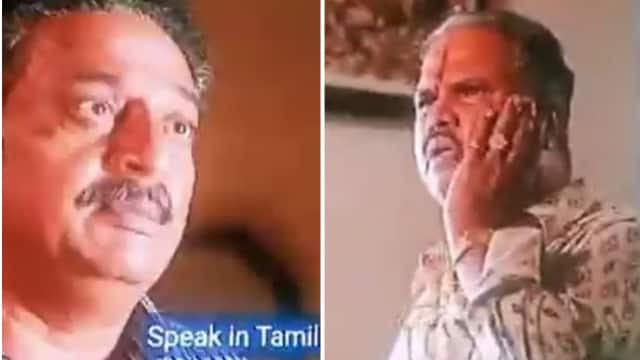 The film ‘Jai Bhim’ has been released on OTT platform Amazon Prime Video on Tuesday. Well-known South artist Suriya has played the lead role in this film. Prakash Raj, who has made four moons with his acting, has also played an important role in Jai Bhim. This film has been released in total 5 languages. Shortly after its release, the film now seems to be surrounded by controversies. A video click of Prakash Raj surfaced from the film on social media is becoming fiercely viral. Due to this video, now the clouds of trouble have come upon Jai Bhim.

Actually, in the video going viral, it is shown that Prakash Raj’s character has a strong hatred for the Hindi language. In the video, an elderly man is seen talking in Hindi and Prakash Raj gets enraged on hearing his Hindi. Losing his cool, Prakash Raj even slaps the old man. While slapping, Prakash Raj is clearly seen telling the elderly man that he should speak only in Tamil. Due to this reason, this video click has now been mired in controversies.

People on social media are demanding to remove this scene from the film ‘Jai Bhim’. Well-known trade analyst Rohit Jaiswal has shared this video on social media. While sharing the video, he wrote, ‘Heartbroken after watching Jai Bhim. Have nothing to say against anyone but felt really bad. In a scene in the film, a man is speaking in Hindi. Prakash Raj immediately slaps her and asks her to speak only in Tamil. To be honest, there was no need to cast this scene. Hope he removes this scene.

I am really heartbroken after watching #JaiBhim, nothing against actor or anyone but felt really bad, there is a scene in the film where a person speaks Hindi and Prakash Raj slaps him and tells him to speak in Tamil

Honestly this kind of scene was not needed….Hope they cut it