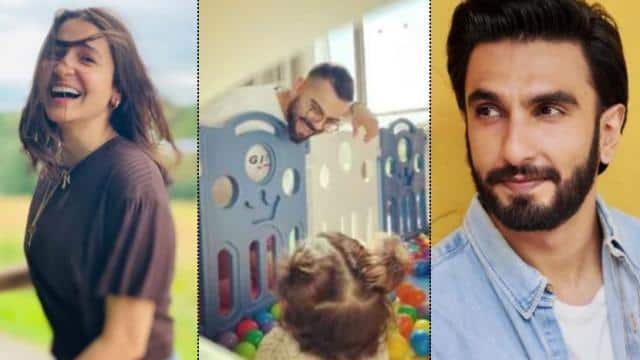 Bollywood actress Anushka Sharma recently shared a cute picture of her loving husband Virat Kohli and daughter Vamika on her Instagram, seeing that many Bollywood stars became fans of her daughter and commented on the family photo of the actress. . Seeing this picture, Ranveer Singh also could not stop himself. However, earlier on the day of Durgashtami too, the actress shared a photo of Vamika, on which Priyanka Chopra and Ranveer Singh showered love by sharing an ‘unseen emoji’.

While sharing this photo, Anushka wrote – My whole heart in one frame. In the photo, Vamika is playing in a playpen filled with many colorful balls around her, seeing which Papa Virat is seen smiling. Although many stars have commented on this photo, but Ranveer Singh’s comment has managed to grab the attention of the fans. Commenting on this photo with a heart emoji, Ranveer wrote – ‘Haayee’. Apart from Ranveer, Dia Mirza, Suniel Shetty, Rakul Preet Singh, Neeti Mohan, Sania Mirza have also commented while sharing the heart emoji.

Anushka Sharma is very active on social media away from films

Significantly, Anushka Sharma may be away from films these days, but she is very active on social media. The actress often shares her photos and videos. He has a good fan following on social media. After the actress became a mother, everyone is eager to see the picture of her daughter Vamika. The actress shares the photo with the daughter, but the girl’s face is not visible in it.