EXCLUSIVE: Who is Manoj Bajpayee’s idol and why did Sakshi Tanwar lie to Ekta Kapoor? ‘Dial 100’ stars told many stories 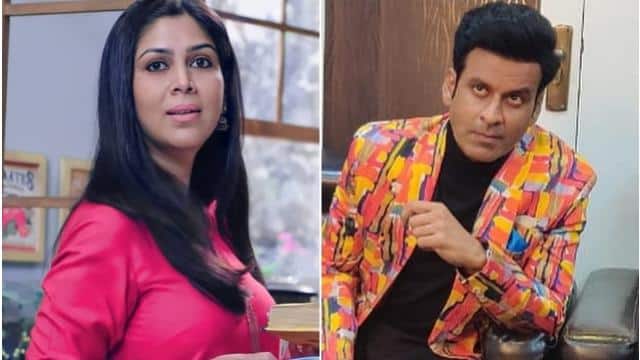 Zee5’s upcoming film Dial 100 is in a lot of discussion these days. In such a situation, actor Manoj Bajpayee and actress Sakshi Tanwar had a special conversation with Hindustan. In this conversation, not only did both the celebs tell about their early days but also mentioned about their upcoming projects.

What was the reason for saying yes to the characters of ‘Dial 100’?
witness: One reason is Manoj Bajpayee sir, the other reason is Neena Gupta ji and Rensil D’Silva (Director) and also the story of the film. I had no reason not to say it.
Manoj: It’s a thriller, you always have curiosity and most importantly it talks about social topics. Even after all the thrills and twists, the parents and the child remained in my mind, which is the amazing thing about this film.

Sakshi, your father is retired from CBI, what was his first reaction on Dial 100?
‘What are you doing son, first tell this…’ This was the first line of Papa. I then told him my character… It is with him that when he sees things, he looks very carefully to see if there is any mistake. Whether it is written correctly on the poster, in the dress, on the setup of the office…. Papa starts examining everything very realistically. The rest have felt it in real life as well, because in real life not only that person, but also his family is always affected.

Manoj, once upon a time you started getting suicide thoughts… so how did you fight and win over them?
Came out of college… was rejected for the first time… so was very broken. All my preparations were for NSD, but when it got out of hand, I didn’t understand anything. I didn’t have a plan B and I was very disappointed for about a month. It was a difficult time, but it passed. Due to the help of friends, that time passed. Friends helped a lot.

Once a casting director tore your photos, what was that story? Ever met him again?
Actually there were no casting directors at that time, it was a trend at that time that we used to go to the director or producer’s office and give our photos. Along with this, you write your address on the back and come after giving it. Sometimes he would keep it and sometimes not. In such a situation, once I suddenly saw that he was tearing and throwing my photos. So my heart was broken seeing him. At that time the directors were not available, so all the talks were done with the assistant directors.

Sakshi, how did you get into the entertainment world?
To be honest, I still think about what I am doing. I was preparing for civil services, but that didn’t happen and maybe luck had something else in mind. Once I had left the house for an interview but went to meet a producer Bobby. Perhaps that was the turning point of my life, then I did not even think that this would be my future. I still don’t know why I did this. The rest I didn’t do for all my shows, from ‘Kahaani’ to ‘Bade Achhe’.

Sakshi, how did you come to this cinematic world even after your death?
I am telling the truth, when I was offered ‘Kahaani.. Ghar Ghar Ki’.. I refused them thrice. I used to say something after thinking of excuses, but time and again Ekta used to tell the break of my every excuse. After this I had asked for a lot of money on my behalf.. which I found out later, when Ekta had told me that even if you had asked me for three-five times it, I would have given it. My journey was very different from that of Manoj ji. I consider myself very lucky.

Manoj, you are the idol of many people, who is your idol?
Different people influenced me at different times. When I was young, the poems of Ramdhari Singh Dinkar ji and Harivansh Rai Bachchan ji influenced him. When I grew up a little bit, Amitabh Bachchan’s interviews and manner of speaking etc. impressed me a lot. Then the films of Dilip Kumar Sahab, Balraj Sahab influenced him. Naseer sahab, Ompuri sahab, Surekha Sikri ji, Pankaj Kapoor ji, Shabana Azmi, Smita Patil ji… Every time people impressed. Was lucky to have worked with so many nice people. Then Barry John groomed me and gave me a new education.

Sakshi, you and Manoj sir have almost 30 years old connection, what is that?
In fact, when I was in college, I was a member of the Dramatic Society. There should be a Hindi public play in college, so Manoj sir had come to teach us. His play Netua was a huge hit at that time. Manoj sir gave us the workshop and we all learned a lot. We played Madam, in which luckily I got a good role. So in a way my first director is Manoj sir.

What are your upcoming projects?
Manoj: Just finished two movies. After that I am going to prepare for Abhishek Chaubey’s film. I will be in preparation for it for about three months.
witness: Currently I am shooting for a Netflix series Mike, apart from this there is another digital film. His announcement is pending and the shoot will start in the next 15 days. Along with this there is also Prithviraj of Yash Raj Banner.