Ex Army officer made a mistake in the poster of ‘Gorkha’, Akshay Kumar gave this answer 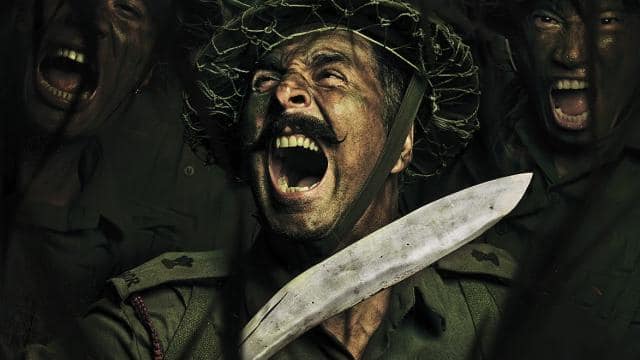 Bollywood actor Akshay Kumar recently released two posters of his upcoming film ‘Gorkha’. Seeing these posters of Gorkha became viral on social media, although now an X Army officer has caught a mistake in it, to which Akshay has also replied.

X Gorkha made a mistake
In fact, Ex-Gorkha officer Major Manik M Jolly has pointed out that the manner in which the khukri is shown in the poster is not correct. He wrote in his tweet, ‘Dear Akshay Kumar, as an ex Gorkha officer I thank you for making this film… However, details matter. Please fix the khukri, there is a sharp edge on the other side….. it is not a sword. The khukri strikes from the inside of the blade. Thank you.’

Dear @akshaykumar ji, as an ex Gorkha officer, my thanks to you for making this movie. However, details matter. Kindly get the Khukri right. The sharp edge is on the other side. It is not a sword. Khukri strikes from inner side of blade. Ref pic of Khukri att. Thanks. pic.twitter.com/LhtBlQ9UGn

Reply to Akshay Kumar
At the same time, Akshay Kumar also replied to this and he wrote, ‘Dear Major Jolly… Thank you so much for pointing this out. We will take utmost care while making the film. I am very proud and honored to be a Gorkha. Any suggestions to bring it closer to reality would be most appreciated.

Dear Maj Jolly, thank you so much for pointing this out. We’ll take utmost care while filming. I’m very proud and honored to be making Gorkha. Any suggestions to get it closest to reality would be most appreciated. 🙏

Biopic of Major General Ian Cardozo
After Atrangi Re and Raksha Bandhan, Aanand L Rai’s Color Yellow Productions and Akshay Kumar’s Cape of Good Films have once again joined hands. They have come together for a biopic based on the life of Major General Ian Cardozo, a veteran officer of the Indian Army’s Gorkha Regiment (5th Gorkha Rifles), the film will be directed by National Award winner Sanjay Puran Singh Chauhan.

What did Major General Ian Cardozo have to say
Akshay will play the role of the great war hero who fought in the wars of 1962, 1965, and especially in the Indo-Pakistani War of 1971. This being a special film about a war icon, the actor has decided to present it himself.

Sometimes you come across stories so inspiring that you just want to make them. #Gorkha – on the life of legendary war hero, Major General Ian Cardozo is one such film. Honored to essay the role of an icon and present this special film.

What does Ian Cardozo have to say…
Regarding this, Major General Ian Cardozo says, ‘I am honored to share this story on the 50th anniversary of the 1971 war. It is a reminder of the courage and sacrifice of the Armed Forces of India. I am looking forward to working with Aanand and Akshay as they bring it to life. This story reflects the values ​​and spirit of every officer of the Indian Army.

Share
Facebook
Twitter
WhatsApp
Previous articleRanveer Singh shortlisted this name for his child, said- ‘Deepika Padukone was such a cute baby, wasn’t she…’
Next articleShahrukh’s son promised to help the poor, Aryan Khan said to NCB – ‘I will do something that will make you proud of me’
RELATED ARTICLES
Entertainment