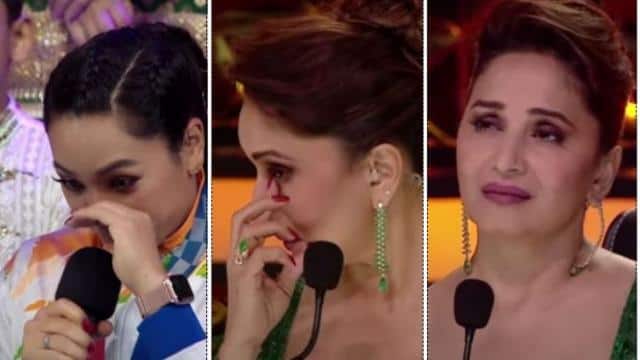 Olympic silver medal winner and India’s star weightlifter Mirabai Chanu attended Colors Television’s famous show Dance Deewane 3. During this, she became emotional after seeing her journey through dance. Not only this, even the judge actress Madhuri Dixit of this show could not stop herself from getting emotional. A promo of this show has been released, in which both these veterans can be seen crying.

Mirabai will have a wonderful welcome in Dance Deewane

Mirabai Chanu won the weight lifting silver medal in the women’s 49 kg category at the Tokyo Olympics. Therefore, the dance show makers made a special plan to welcome Mirabai wonderfully and to honor her on the special occasion of 15th August. In the show, the contestants will show the journey of Mirabai Chanu through her dance.

In this promo that surfaced, you can see that when Mirabai has come on the sets of Dance Deewane 3, everyone gives her a wonderful welcome. After this, the contestants perform their dance talents. Seeing the act of the contestant, Mirabai becomes very emotional and she says “I remember everything after seeing their dance, you all forgive me,”.

Madhuri became emotional after listening to the widow of ‘Pulwama Sainik’

The second clip of the promo shows the widow of a soldier who was martyred in the Pulwama attack telling about her husband and family. Meanwhile, the woman recalled how she felt when she was informed about the martyrdom of her husband. Mirabai Chanu and Madhuri Dixit also cannot hold back their tears after listening to the woman and become emotional.

These stars will also enhance the beauty of the show!

Sharing this video, the channel wrote in the caption, In this weekend’s episode, everyone is preparing to say ‘Salaam India’ to Mirabai. ‘Dance Deewane’ has also named this week’s special as ‘Salaam India’. The special thing is that in the upcoming special episode of this week, along with Mirabai Chanu, cricket legends Kapil Dev and Mohinder Amarnath will also be seen. Apart from these, Lali Bhavani Devi, who won fencing in the Olympics and wrestler Priya Malik will also be involved on the set.