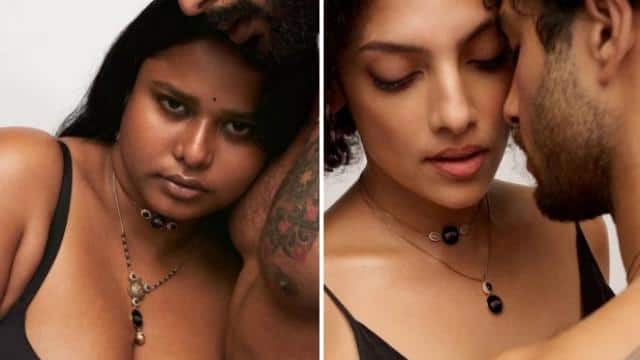 Some people are stunned to see the new ad campaign of well-known fashion and jewelery designer Sabyasachi Mukherjee. There are pictures of some models related to the ad of Mangalsutra on her social media handle. Many people are demanding to remove these photos by calling them obscene and nudity. People are writing against this ad on Twitter. Many pictures of this jewelery campaign are viral on social media.

The model is wearing bra and jeans

People are expressing displeasure over the advertisement of fashion designer Sabyasachi Mukherjee’s new jewelery collection. There are some pictures on his official social media handles which are being opposed. In the photo, the woman wearing mangalsutra is wearing only a bra. Along with that there is also a mail model. However, there are also models wearing sarees in this campaign. Pictures of two male and two female models are also visible.

people said take back the ad

A social media user has written in protest against this, Well known designer Sabyasachi is selling mangalsutra. I appeal to all insta users of my timeline to report this nudity by visiting their insta handle. This is not acceptable. It is important to show them that such ads can backfire on them. The brand should take back its new ad strategy. Another social media user has written, a censor board or regulatory body is needed, if there is already then such ads should be stopped which are exactly like blue film. Looks like these people are promoting porn movies instead of holy mangalsutra.

I appeal to all Insta users on my TL to go on their Insta handle and report this for nudity. This is just not acceptable. They need to be shown that woke advertising will misfire. The brands must back off from their new ad strategy! pic.twitter.com/jqw7KCfG8E

jewelery is too expensive

Sabyasachi has launched the Intimate Fine Jewelery Collection. She has shared pictures from Royal Bengal Mangalsutra and Bengal Tiger Icon Necklace Collection. There are also earrings and rings with them. This jewelery of Diamond, Gold and Semi Precious Stones is very expensive. According to reports, jewelery starts at Rs 1,65,000.