Bunty Aur Babli 2: Saif and Rani got excited before the release, Siddhant and Sharvari gave this special message to the fans 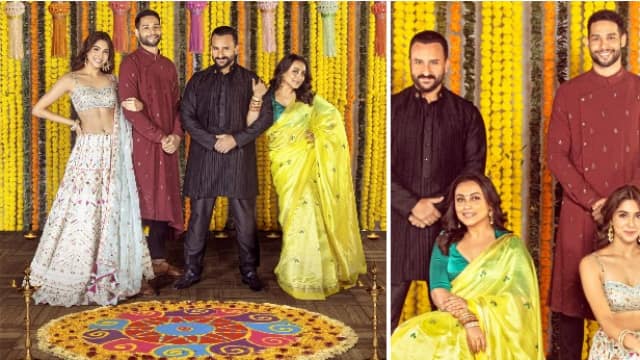 The trailer of Bunty Aur Babli 2, made under the Yash Raj Films banner, has created a buzz everywhere. Rani Mukerji, Saif Ali Khan, Sharvari Wagh and Siddhant Chaturvedi will be seen in the lead roles in this film. In this film, con couples of two different generations will be seen competing with each other. In this film, Saif and Rani will be seen in the role of old fashioned Bunty and Babli. The cast of the film is quite excited for the release of this family entertainer. After a long wait of almost two years, the cinema halls are going to be buzzing.

Saif got excited before the release of the film

Excited about the release of this film, Saif Ali Khan said, “We are excited to celebrate Diwali after two years. Our industry was worst affected by the Corona pandemic. Now it is improving. We are sure that the audience will support us and come back to the cinema to watch good movies, as theaters have opened in India now. Movies have always been a part of festivals as people go to watch movies with their families to celebrate the festival. We are sure that this Diwali also he will go to see films.

Rani gave this special message to the fans

Actress Rani Mukerji says, ‘Diwali is a festival to celebrate together. This year it has become more important as we are celebrating this festival after a long gap of 2 years due to Corona pandemic. The fun of watching movies comes only with people and now we can again watch movies together with everyone. That’s why we are confident that the audience will come back to the cinema with their families to watch entertaining movies on these festivals. Bunty Aur Babli 2 is a family entertainer and we promise this film will double your enthusiasm.

Four moons engaged in the happiness of principle

Siddhant Chaturvedi, who plays the lead role in the film, says, “Cinema and celebration go hand in hand. We all have had a very happy time watching movies in the cinema hall. Till two years ago, we used to celebrate this happiness together. We have started seeing hope now and I am sure people will love to see good films on the big screen.

Sharvari is excited for the release of the film

Sharvari Wagh is also very excited before the release of her film. The actress says, ‘Cinema halls are opening in the festive season, it feels great. Cinema halls have entertained people every season and taken them to a new world. They are opening back on Diwali. Now it’s time to rejoice by watching the movie on the big screen. Let us celebrate these festivals together. We are hopeful that people will come back to watch movies as a lot of precautions have been taken to ensure the safety of the audience. We wish you a Happy Diwali. We promise that the audience will enjoy watching Bunty Aur Babli 2. Yash Raj Films’ Bunty Aur Babli 2 will release worldwide on November 19, 2021. Varun V has directed this film. Varun V has worked as an assistant director in blockbuster films like Sultan and Tiger Zinda Hai.