Bollywood stars, including Sonu Sood-Dia Mirza, expressed happiness over the repeal of the Agriculture Act, but Kangana Ranaut told – ‘shameful’ 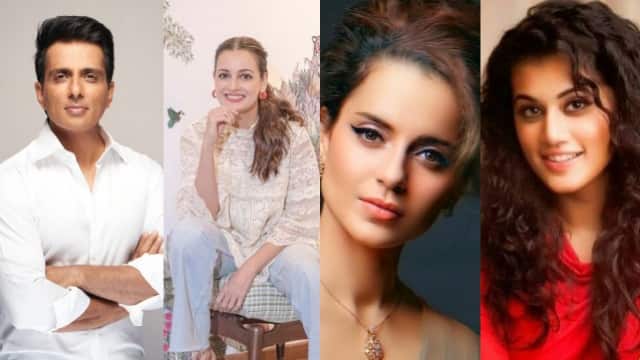 Prime Minister Narendra Modi in his address to the nation today announced the withdrawal of all three central agricultural laws. After this decision, there is an atmosphere of happiness in the farmers’ organizations. Apart from this, politicians of different parties, leaders of farmer organizations and different regions, groups have commented giving their reactions. Bollywood celebs are also giving their reaction by taking this decision. However, if anyone is talking about the most in the reaction of Bollywood stars, then it is Bollywood Quinn Kangana Ranaut. While Sonu Sood, Taapsee Pannu, Anurag Kashyap, Richa Chadha, Shruti Seth, Dia Mirza have expressed their happiness on PM Modi’s announcement of withdrawing the Farmer Act, Kangana has expressed displeasure over this decision and called India a ‘Jihadi nation’. .

Welcoming this decision of PM, Bollywood actor Sonu Sood has written – Farmers will come back to their fields, the country’s fields will be waved again. Thank you Narendra Modi ji. With this historic decision, the light of the farmers in the East became even more historic. Jai jawan jai kisan.

Farmers will come back to their fields,
The country’s fields will wave again.
Thank you @narendramodi Yes, with this historic decision, the light of the farmers in the East has become even more historic.
Jai jawan jai kisan.

This is a wonderful news!
Thank you,@narendramodi ji, @PMOIndia, for taking back the farm laws. Thank you, farmers, for raising just demands through peaceful protests. Hope you will happily return to be with your families on the Parkash Purab of Sri Guru Nanak Dev Ji today.

Apart from this, in another post, Sonu Sood, while wishing Guru Nanak Jayanti, wrote- “This is a wonderful news! Thank you, Modiji, for withdrawing the agricultural laws. The just demands being raised in the peaceful agitation of the farmers will be considered.” Now it is hoped that the farmers agitating on the light will happily return with their families. Shri Guru Nanak Dev Ji’s East today….”

Actress Taapsee Pannu has given a positive reaction on her Twitter account, being happy about the decision of the PM to repeal agricultural laws. Taapsee, in her tweet post, described this decision as the victory of the farmers. Simultaneously wishing people on Guru Nanak Jayanti, he wrote, “Also .. Gurpurab diyan sab nu vadhaiya.”

While actress Dia Mirza wrote on Twitter – Jai Kisan, while actress Richa Chadha retweeted the tweet of a person named Bhupinder Chaudhary, writing, “You have won! Your victory is everyone’s victory.” Actress Gul Panag, Himanshi Khurana and Shruti Seth have expressed their happiness by tweeting positively. 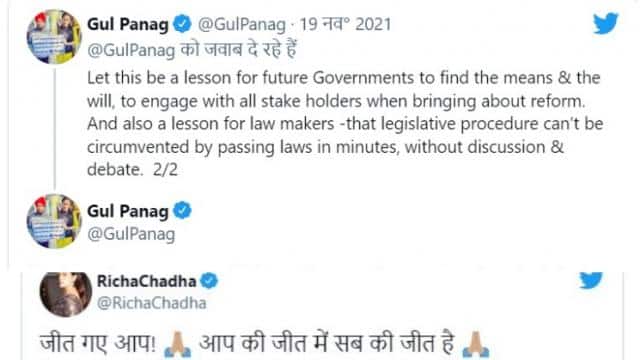 Now let’s talk about Kangana Ranaut’s reaction, she has reacted to the PM’s decision from her Instagram story. Sharing a post on her Instagram story, Kangana wrote – Sad, shameful, absolutely inappropriate. If people on the streets start making laws in lieu of the elected government in Parliament, then it is a jihadi nation. Congratulations to all those who wanted this.’ 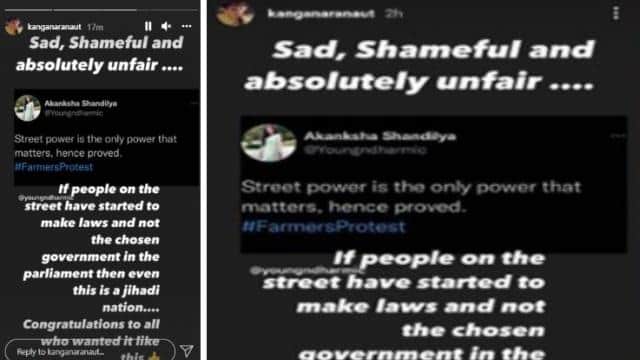