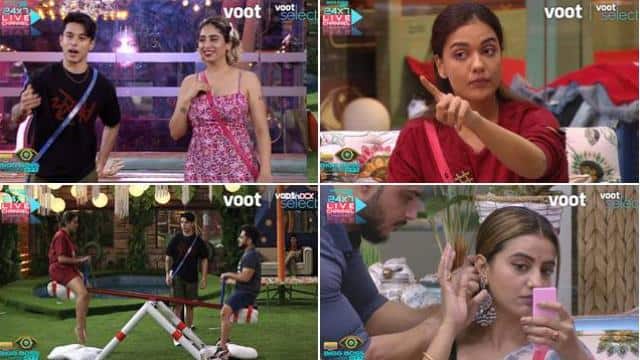 Bigg Boss OTT has completed almost three weeks. Karan Johar is hosting the show, who organizes classes for the contestants on Sunday Ka Vaar. Urfi, Karan Nath and Riddhima have been eliminated from the show so far. In such a situation, let us tell you what happened on the 20th day of the show.

Three people refused to work
The 21st episode of Bigg Boss OTT started with the song ‘Rock and Roll Soniye’ from the movie Kabhi Alvida Na Kehna. Due to the previous day’s task, Milind Gaba, Divya Agarwal and Akshara Singh refused to do any household work. All three said that they will do all their work but no one else’s work. After this, the rest of the family decided that those who do not do household chores will not get tea leaves, but after some time this decision was canceled by the family members themselves.

Akshara cried
In the morning, there was a conversation between Shamita and Akshara regarding utensils. After which Akshara started crying, while the symbols came for some time, on which Akshara said about Shamita that I am always interrupted. Utensils, food are put on everything. According to Akshara, she has worked above all. For Shamita, Akshara said that she is behaving like this from the beginning, as if I am nothing, everyone taunts me. At the same time, Shamita tried to talk but things could not work out between the two.

Rakesh – Shamita’s kiss
Very good chemistry is being seen between Shamita Shetty and Rakeysh Bapat. In today’s episode, Shamita asks Rakesh to come and kiss him. After this, Rakesh did a kiss on Shamita’s cheek. The contestants of the show danced to the song ‘Quick Gao’ from the upcoming Netflix series ‘Money Heist’.

‘punishable’
In the evening, Bigg Boss asked the housemates to name two connections after mutual consent, which would be eligible for punishment. At the same time, Bigg Boss also said that since Divya has no connection, only her name can be taken. That is, a connection and Divya. After this, the family members took each other’s names together, but mutual consent could not be reached. Gaba- Everyone else took Divya’s name except Akshara, but Divya refused to take punishment.

C-saw punishment to the family members
Since the family members could not take names together, Bigg Boss tasked everyone except Boss Man and Boss Lady to watch for an hour each. However, Rakesh-Shamita refused to do this task. While Divya, Akshara, Milind, Nishant and Moose completed this task.