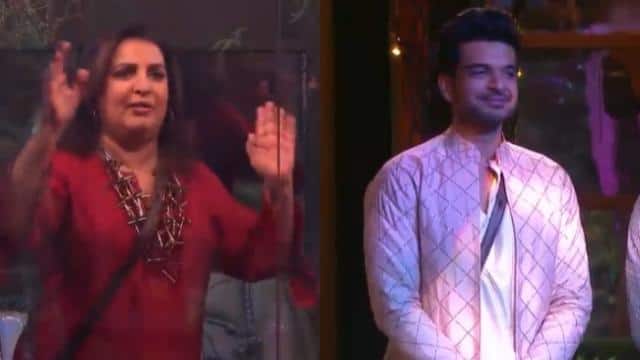 Guests continued to pour in on Sunday’s episode of ‘Bigg Boss 15’ Weekend Ka Vaar. During this, there was a lot of fun inside the house. Farah Khan, Bappi Lahiri and Bhuvan Bam reached the stage with Salman Khan. At the beginning of the show, Ishaan Iyer and Umar Riaz clashed in the arena. In the first round, both had to argue which Umar won. Ishaan prevailed in the physical fight round. Thus it became a 1-1 draw.

Farah Khan reached inside the house

Farah Khan comes shortly after Bappi Lahiri’s departure. Salman asks her what would she do with the family members if she was Bigg Boss? She says that she would take the family members to the forest. After this she enters the house to meet the contestant and tells that she will take a contestant out. At first, Farah asks everyone to rank themselves and stand in front of that number. Many contestants stand on the number 1 position, then Farah gives her decision.

who got what number

6 contestants were nominated this week. These included the names of Afsana, Vidhi, Vishal, Ishaan, Akasa and Donal. Farah first takes Ishaan’s name. On hearing this, Misha starts crying and hugs Ishaan. Then Farah says that ‘Well, you do not want Ishaan to go out with me, then you yourself go instead of him.’ Then Farah takes the name of the method. In the end, Farah told that there will be no elimination this week. It was nothing less than a gift for the contestants on the occasion of Dussehra.