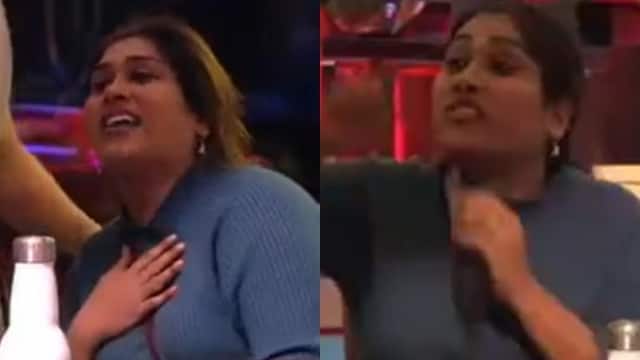 In ‘Bigg Boss 15’, Punjabi singer Afsana Khan did a lot of drama at the beginning of the show. When Salman Khan explained to her, she controlled herself and remained a little calm but now once again Afsana was seen returning to her old antics. After a rift with her friends Umar Riaz, Karan Kundra and Tejashwi Prakash at home, she was seen taking out her anger on other family members.

Afsana Khan was out of the task done to enter the VIP room. He accused Rajiv Adatia of touching him inappropriately. The members of the house said that she is playing the woman card. During this, Jai Bhanushali and Prateek Sahajpal tried to convince them a lot but they did not listen to anyone. Afsana does not stop here, she says that Shamita Shetty is using her brother Rajiv. He called Shamita ‘mental’ and ‘fake’.

She starts breaking the property of ‘Bigg Boss’ and tries to harm herself with a knife. After a while ‘Bigg Boss’ invites him to the confession room and asks him to leave the house. Afsana refused to step out. Some people were also sent to the confession room to get them out but Afsana refuses. She is adamant that she will not leave the house alone and will take Rajiv along.

Will Afsana be out of the show?

Afsana says that she will file a case against Rajiv after she is out of the house. When ‘Bigg Boss’ announces Afsana’s eviction, Rajiv starts crying and says that she is not bad at heart. Now what happens next will be thin in the next episode.

Share
Facebook
Twitter
WhatsApp
Previous articleKavya will betray Vanraj, Leela Ba will force Anuj to marry Anupama in front of Babuji-Children
Next articleSooryavanshi Box Office Collection Day 8: ‘Sooryavanshi’ has a strong hold, will get the benefit of the weekend
RELATED ARTICLES
Entertainment