Best photo of Kareena’s bikini selfie series from Maldives came in front, the beloved was seen sleeping in her lap 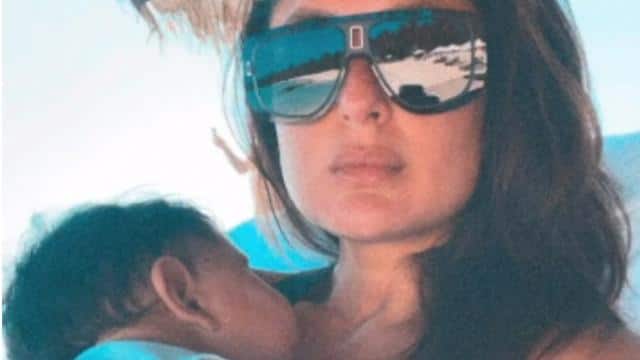 Kareena Kapoor is on a Maldives vacation with her two sons and husband Saif Ali Khan. She is sharing her selfies with fans every day. He shared many photos but his latest picture is the best ever. In this photo, his son is seen sleeping on top of Kareena. Kareena went to Maldives on Saif’s 51st birthday. This is his son Jeh’s first outing.

In this picture, Kareena is on the beach and son Jahangir is sleeping in her lap. Kareena has given the caption, Light, Camera, Naptime. Earlier, Kareena has posted many photos in bikini. Kareena and Saif’s younger son Jeh was born in February. Bebo kept the child’s name and face hidden from the media for a long time. After the release of his book Pregnancy Bible, the name and pictures of Taimur’s younger brother came in the media. According to reports, Kareena’s book has the baby’s name and pictures. Saif’s younger son Jeh’s looks are looking like Taimur to the people. Elder sister Sara Ali Khan has also shared her picture. According to reports, Sara had told about meeting Jeh for the first time. He had said, I looked at him and he smiled, my heart melted at the same time. There was a lot of ruckus in the name of Kareena’s elder Taimur. Even after knowing the name of the younger son, Jahangir, some people made negative comments. However, no official comment related to the name has come from Saif and Kareena till now.