Aryan Khan reached NCB office for the first time after getting bail, to be present every Friday 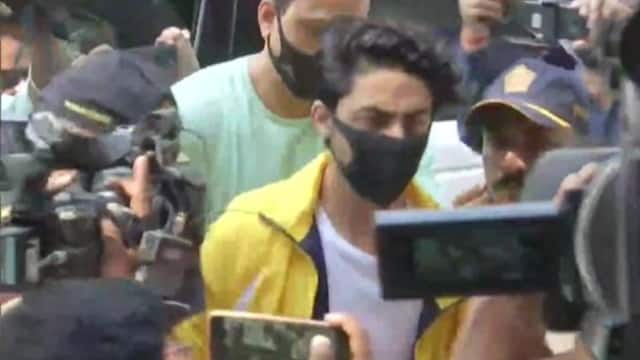 Aryan Khan, released on bail in the Mumbai cruise drugs case, reached the Narcotics Control Bureau (NCB) office today. The Bombay High Court had granted him bail with 14 conditions. One of them was the condition that he has to appear in the NCB office every Friday between 11 am and 2 pm. This is the first Friday since his release from jail. Aryan Khan was released from Mumbai Arthur Road Jail on 30 October after spending 22 days in jail.

The probe agency had claimed in the court that Aryan’s WhatsApp chats contained his involvement in ‘illegal drug deals’ and also had a hand in smuggling foreign drugs. However, no drugs were found from him. Arbaaz Merchant was his friend with Aryan. NCB found drugs from Arbaaz’s shoes. During the interrogation of the investigating agency, Arbaaz himself removed a pouch from his shoes which contained charas.

Apart from Aryan Khan, his friend Arbaaz Merchant and model Munmun Dhamecha were also granted bail by the Bombay High Court. Aryan Khan’s bail conditions include that he cannot leave Mumbai without informing the police and he has to appear before the investigating agency every Friday. The Court in its order said that if the accused violates any of the conditions, the NCB shall directly apply to the special judge/court for cancellation of their bail.

Aryan Khan, Arbaaz Merchant and Munmun Dhamecha were nabbed by the NCB from Cruise on October 3 and booked under relevant sections of the NDPS Act for possession, consumption, sale/purchase of banned drugs and conspiracy and abetment.