Anecdote: Raveena Tandon and Akshay Kumar were romancing on ‘Tip Tip..’, Ranveer Singh was thrown out of the shooting set 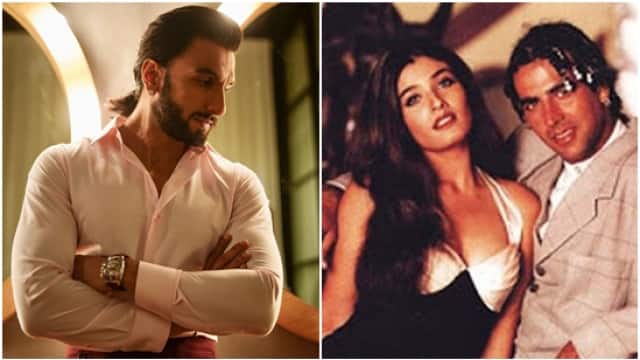 Actor Ranveer Singh, who made his Bollywood debut with the film ‘Band Baaja Baaraat’, is counted among the top stars today. Ranveer Singh has won everyone’s heart with his strong performance and energy. While fans eagerly wait for Ranveer’s films, on the other hand his films also explode at the box office. Ranveer Singh will soon be seen in the film 83. Meanwhile, let us tell you the story when Ranveer was thrown out of the shooting sets of Akshay Kumar and Raveena Tandon. This anecdote was shared by Raveena, who was in discussion about the web series ‘Aranyak’ these days.

Raveena told the story
In fact, during a conversation with Zoom TV, Raveena Tandon told the anecdote, ‘He (Ranveer) is a very naughty boy, while it is also very sweet that he remembers and he always pulls my leg saying- I So was fired from the set. But the reality was different. Actually ‘Tip Tip Barsa Pani’ with Akshay Kumar was a very sensual song filmed in the midst of rain. At the same time, I believe that there is a right age for children to be exposed to such things.

i was feeling uncomfortable
After this Raveena had said, ‘I was feeling uncomfortable at that time that this poor child is looking at me like this, so how would he feel. So I requested the producer and said that only the parents are allowed on the set, while the children are not. So my intention was not wrong. Everyone else knows that I love children. I would be the last person to be tough with a child. But I also believe that there is a right age for everything.

Ranveer and Raveena’s projects
On the other hand, if we talk about the work front of both, Ranveer will soon be seen in Kabir Khan’s 83. Apart from this, ‘Jayeshbhai Jordar’, ‘Circus’ and ‘Rocky and Rani’s love story’ are also in Ranveer’s account. Apart from this, if we talk about Raveena, then she will be seen in KGF 2. Along with Raveena, Yash and Sanjay Dutt will also be in important roles in the film. The film will be released on 14 April 2022.

Share
Facebook
Twitter
WhatsApp
Previous articleSaira Banu became emotional after remembering Dilip Kumar, wrote in the letter – ‘This time the conversation could not happen but they will always be together’
Next articleAkshay Kumar told why he is playing a very small role in Sara-Dhanush’s film ‘Atrangi Re’
RELATED ARTICLES
Entertainment