Amitabh Bachchan remembered the days of his youth by dancing with Kriti Sanon, had praised the beauty of the actress earlier 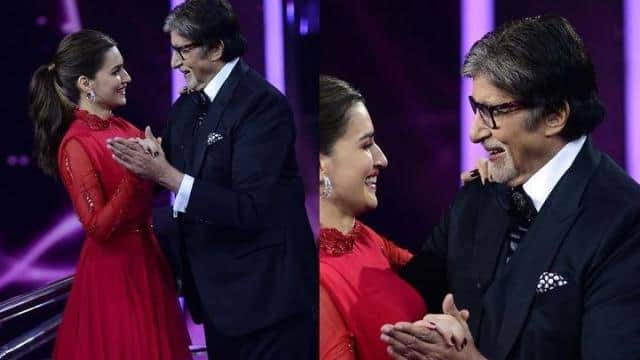 The Shahenshah of Bollywood, Amitabh Bachchan has been entertaining audiences since the 70s and still remains a favorite of the audience. These days he is hosting Sony TV’s quiz show ‘Kaun Banege Crorepati-13’. Meanwhile, the megastar has shared a photo with actress Kriti Sanon, in which he is seen dancing with the actress. While sharing this photo, he has remembered his college days. This picture of Big B and Kriti has become viral on social media.

Big B happy to dance with Kriti

In this picture shared by Amitabh Bachchan, you can see that Amitabh Bachchan is seen in a blue suit and Kriti is seen laughing in a beautiful red dress with a pony tail. In the picture, Kriti is seen holding Amitabh’s hands. In the photo, both are smiling looking at each other. Looking at their posing style, it seems that they are doing a couple dance on the sets of KBC. Both the actors are looking fabulous in the photo.

Remembered the moments spent in college and Calcutta

While sharing the photo with Amitabh Kriti, the Instagram caption reads – Ballroom, dancing with the beautiful red lady…Ah, he is back in college and Calcutta today. Looking at the background of this photo posted by Amitabh, it seems that it is a photo clicked on KBC’s stage. If so, then maybe Kriti will soon be seen promoting her upcoming movie ‘Hum Do Hamare Do’ in the upcoming episode of the show. However, no official announcement has been made about this yet.

For your information, let us tell you that Amitabh Bachchan often comments on beautiful pictures of Kriti Sanon. In March this year, when Kriti shared a glamorous photo of herself on her Instagram. Big B was convinced seeing her beauty in the photo. Commenting on Kriti’s post with a heart emoji, he wrote – Wow.

Talking about the work front of Amitabh and Kriti, Kriti was last seen in the recently released film ‘Mimi’. After this she also appeared in ‘Bachchan Pandey’, ‘Bheliya’, ‘Ganpat’ and ‘Adipurush’. Will give At the same time, Big B’s film ‘Chehre’ has been released recently. After this he will be seen in the film Brahmastra alongside Alia Bhatt, Ranbir Kapoor and Nagarjuna. Apart from this, Amitabh Bachchan will be seen in important roles in Jhund, Butterfly, Goodbye, and Meday.