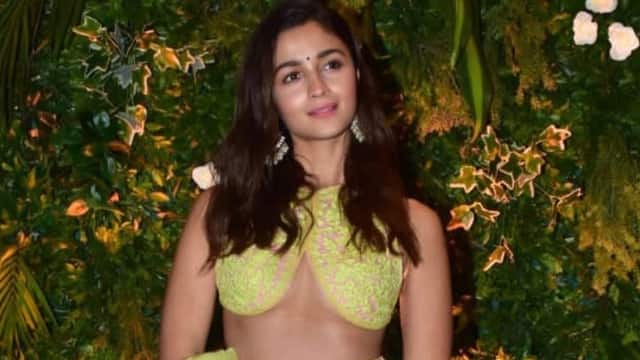 Bollywood actress Alia Bhatt is often seen garnering praise for her great fashion sense and the choice of traditional dresses for special events. But recently there has been a tremendous uproar on social media regarding an outfit of Alia. Alia wore a very beautiful lehenga during the sangeet of Anushka Ranjan and Aditya Seal. The blouse of this lehenga is very stylish and revealing. Due to which trolls were seen targeting Alia. Not only this, many people accused him of copying Urfi Javed.

Actually, Alia Bhatt wore a lemon yellow colored traditional outfit in the sangeet of Anushka Ranjan and Aditya Seal. In which she was looking so beautiful and hot that as soon as Alia entered the event, all the cameras turned towards her. She made a very different stylish and designer blouse with this lehenga, which was also backless. She carried very minimal makeup and jewelery with this outfit. These pictures of Alia Bhatt are going viral on social media.

On the one hand, Alia is getting a lot of praise for her boldness and confidence on her photos. On the other hand, many people were also seen trolling him. When a troll found Alia’s blouse unsightly, many people asked if she was copying Bigg Boss OTT fame aka Javed? However, whatever be the case, there are tremendous discussions about this look of Alia.