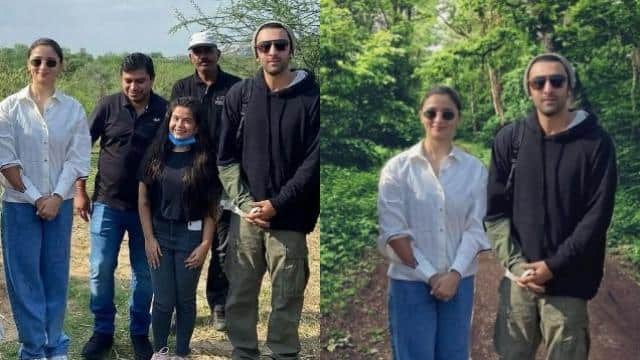 Actors Ranbir Kapoor and Alia Bhatt have been in news for their private Jodhpur vacation. In this vacation, Ranbir celebrated his 39th birthday with Alia. Many pictures of this party were seen on social media. At the same time, Alia also created a sensation on social media by sharing many unseen photos to wish her loveboy on her birthday. Now many more pictures of these two have come out from Jodhpur, in which these love birds were seen in a very happy mood while posing with their fans.

Ranbir-Alia were seen posing for the fans

In these pictures, you can see that Alia Bhatt is seen in a white oversize shirt and denims with a bun in her hair and sunglasses over her eyes. She completed her look with white sneakers and gold hoops. On the other hand, talking about Ranbir’s look, he looks handsome in a dark blue hoodie with green cargo pants.

Apart from the pictures, a video was also shared on this Insta page, in which it can be seen that Alia-Ranbir have reached the spot in a jeep and are happy seeing the location.