Akshay Kumar wanted to bring down Vaani Kapoor on the sets of ‘The Kapil Sharma’, Archana Puran Singh opened the poll by making a video 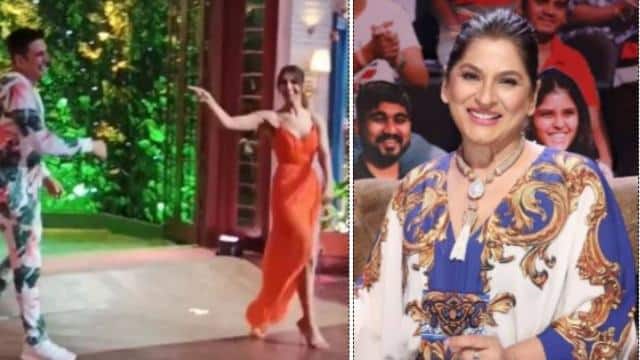 The player of Bollywood i.e. Akshay Kumar wins the hearts of the audience like his acting, in the same way he makes everyone’s day with his small mischief. He is always happy and cool in his busy time. Akshay Kumar has often been joking with his family and friends. Say that Akshay Kumar loves to prank. A sample of this has been shared by the judge of the comedy show ‘The Kapil Sharma’ Archana Puran Singh on her Instagram. In this, Akshay had planned to take down actress Vaani Kapoor, but she survived. Akshay’s prank was left behind.

Akshay Kumar seen with the team of ‘The Kapil Sharma’

Archana Puran Singh took to her Instagram to share a video of the shooting of the first day of ‘The Kapil Sharma’, in which Akshay Kumar is seen with the cast of ‘Bellbottom’. On the sets, Akshay along with Kapil Sharma, Bharti Singh, and other actors can be seen doing some discus on stage. At the same time, a glimpse of the audience can be seen in the video. This is a behind the scenes video, which has gone viral on social media.

In this video, Archana Puran is making a video from mobile. Everyone is seen waiting for the actress Vaani on the stage. As Vaani is about to arrive, Akshay Kumar picks up a banana peel from the table and puts a banana peel in the middle of the entry gate so that Vaani slips and falls while wearing High Hill. However, Akshay is also standing on the side waiting to save Vaani. Vani comes, but she sees the banana peel lying on the ground and escapes. With this, she understands who can do this work. She starts laughing and points at Akshay.