Akshay Kumar again stopped speaking of Kapil Sharma, told that the feet were touched because of not blessing 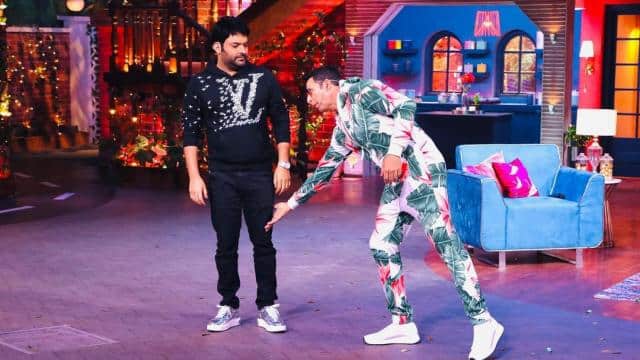 Kapil Sharma’s show is going to start soon. Akshay Kumar will be the first guest on the show. At this time both are seen pulling each other’s legs on social media. In this matter, although Kapil is heavy on everyone, but Akshay is one step ahead of him and he does not lag behind in answering. Kapil shared a picture from the sets of his show in which Akshay Kumar was seen touching his feet. Kapil wrote in the caption that Akshay is taking blessings for his film. Now the actor gave such a reply in the comment section that Kapil’s speech stopped.

Actually, Akshay reached Kapil’s show to promote his film ‘Bellbottom’. During this, something happened that Akshay touched Kapil’s feet, just then what was the picture, Kapil wrote on the picture – ‘The famous film actor Shri Akshay Kumar taking blessings for his new film Bellbottom.’

Trolling Kapil, Akshay Kumar wrote in the caption- ‘And after blessings Mr. Akshay Kumar, searching for Mr. Kapil Sharma’s mind in his knee.’ Fans were heartbroken on this comment of Akshay. A fan wrote- ‘Great Guru.’ One said to Kapil- ‘Why brother has come taste.’ One user wrote – ‘Happy with the answer.’

Earlier, a joke was seen on Twitter between Kapil Sharma and Akshay Kumar. Actually Kapil had made a tweet praising the trailer of ‘Bellbottom’. Responding to this, Akshay wrote- ‘As soon as I came to know about the show, sent my best wishes, not before that. Together I take your news.

Kapil Sharma’s show will air from this month. Recently a teaser also came in which Krushna Abhishek, Kiku Sharda, Bharti Singh, Archana Puran Singh and other actors were seen.