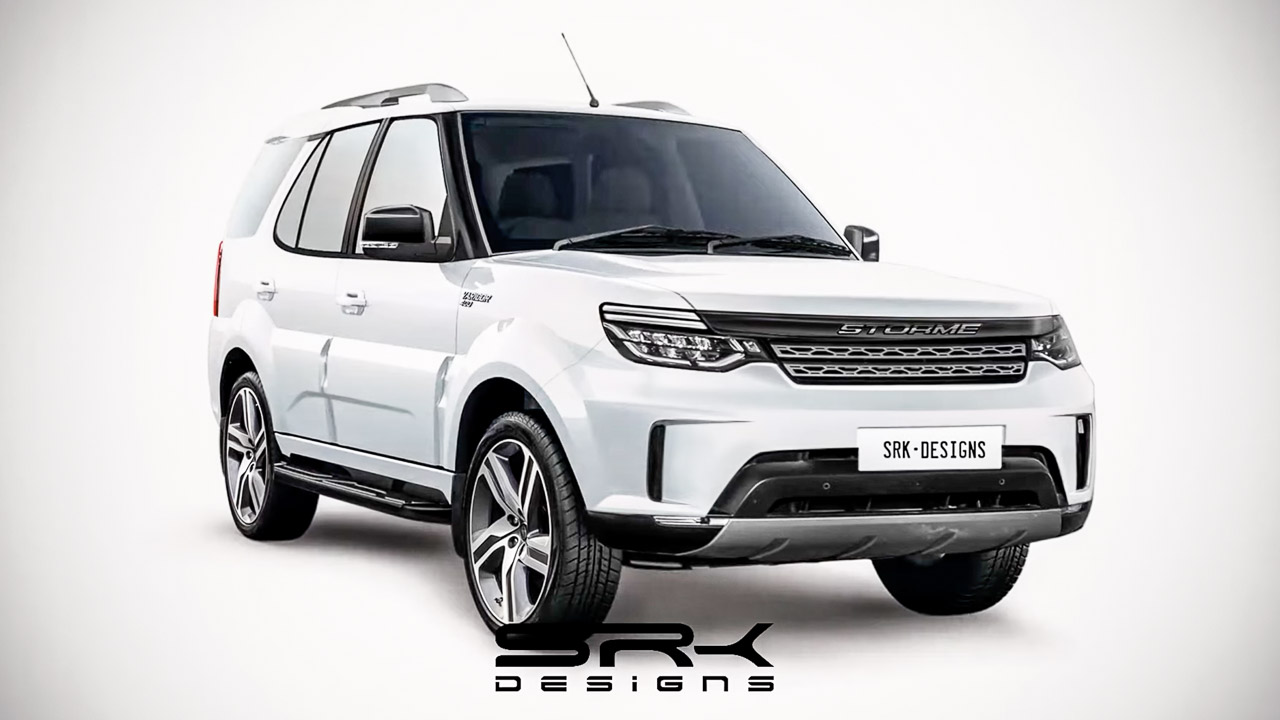 Automotive artists are known for their flair for creating better looking versions of existing cars. Whether it’s on paper (or on screen), these designs look practical and have the potential to come to life. A recent example is from SRK Designs, where the Tata Safari Storme has been updated with design elements taken from the Land Rover Discovery.

Most of the optimizations in this project have been done on the front. The Safari Storme has been updated with the headlamps, grille, bumpers, fog lights and skid plates borrowed from the Land Rover Discovery. Several tweaks have been implemented to ensure a smooth fit for the updated SUV. For example, the fog lights get a special treatment for making them appear much brighter than the stock version.

On the same lines, the bumper section has been updated with a sleek look and feel. The various bevels and grooves are more clearly revealed on the front. These changes have raised the sporty profile of the SUV to a great extent. The LED DRLs have been updated with a parallel strip design, which is truly unique.

Another highlight of this mashup is the blacked-out profile. This can be seen in the blacked-out elements like the top section of the front grille, Storm logo, A pillar, tip of the C-pillar, rear view mirrors and running board.

Talking about the side profile, new tires have been used in it. They look much better than the stock units used in the Safari Storme. The doors have also been updated with additional grooves. These enhance the rugged character of the SUV.

Tata has reintroduced the Safari brand, but the new SUV is quite different than the Storm. As may be recalled, the older version Storme was discontinued before the BS6 emission norms came into force. The New Safari is essentially a 3-row version of the Harrier. The new Safari was launched earlier this year in February at a starting price of Rs 14.69 lakh (ex-showroom, Delhi).

One of the major differences between the old and new Safari is the use of ladders on the frame and monocoque chassis respectively. While the ladder on frame chassis is better suited for off-road conditions, the monocoque SUV offers better on-road performance. The Storme was also a better off-roader as it came with 4WD option. There is currently no 4WD option in the new Safari.

Coming to the engine options, the Safari Storme was powered by a 2.2-litre diesel motor. It was capable of producing 156 PS of maximum power and 400 Nm of peak torque. In comparison, the new Safari gets a 2.0-litre turbo diesel motor that makes 170 PS/350 Nm. Power was less in the Storm but it delivered 50 Nm more torque. This is important, especially in an off-road environment.

Share
Facebook
Twitter
WhatsApp
Previous articleAamir Khan’s brother Faisal is not getting married because of money? Said – I will search if the film is a hit
Next articleRajiv Kapoor Birth Anniversary: ​​That’s why Rajiv Kapoor was unhappy with his father Raj Kapoor, remained alone for the rest of his life after divorce
RELATED ARTICLES
Automobile