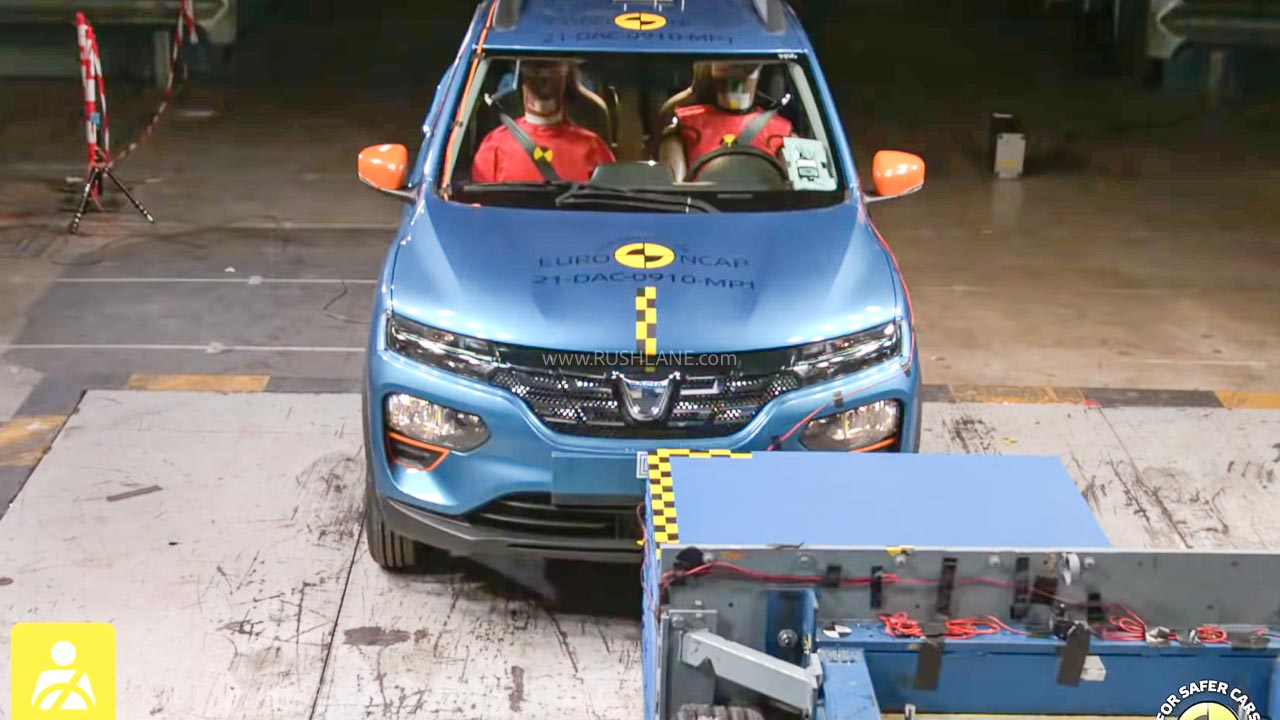 In October last year, the Renault Kwid electric car made its global debut in Europe – in the form of the Dacia Spring EV

Renault launched its cheapest electric small car in Europe under the brand name of its subsidiary Dacia. Named Dacia Spring, it is available in two trims – Comfort and Comfort Plus. The base Comfort trim costs €10,920 (Rs 9.3 lakh). The top variant costs €12,220 (Rs 10.42 lakh) in Germany. These prices include a government grant of approximately €9,500 (Rs 8.16 lakh).

Euro NCAP has done a crash test of the Renault Kwid electric car and has given it a 1 star safety rating. The model that was tested weighed 970 kg, and came with dual front airbags. It gets side head airbags and side chest airbags – for both driver and front passenger.

In its comments to adult safety, Euro NCAP said, “The passenger compartment of the Spring remained stable in the frontal offset test. The legs of the dummy had high readings of several parameters, indicating poor safety, and the structures in the dashboard showed various variations.” Presented a risk of injury for occupants of sizes and those in different positions.

The driver’s dummy’s chest protection was also rated as poor based on chest compression readings during the test. The driver’s pelvis was also poorly protected with dummy readings exceeding the recommended values. Analysis of the impact trolley’s deceleration and subsequent barrier deformation during testing showed that the spring would be a benign crash partner for other vehicles.

In the full width harsh handicap test, the rear passenger’s head was penalized to the extent to which it was propelled, and the safety was rated as poor. The chest protection of both occupants was rated as marginal based on the measurement of compression. In both the side barrier test and the more severe side pole impact, rib compression indicated a marginal level of chest protection, but was good in other important areas of the body.

The spring does not have a center airbag, which protects the occupants from side impact injuries. Testing on the front seats and head restraints demonstrated good protection against whiplash injuries in the event of a rear-end collision.

However, the geometric assessment of the rear seats indicated poor whiplash protection. The Spring has an advanced EcoCall system that partially meets Euro NCAP requirements, and the car has no multi-collision braking system to prevent secondary impacts. The score was penalized for the high forces required to open the door after impact. ,

It sports a gray body color with fluorescent orange accents and gets high ground clearance, faux skid plates and an aggressive bumper design. All the LED lights are seen at the front, while a horizontal stripe has been installed on the upper part, which has 4 graphic features in the bumper. The rear sports 4 full LED lights with a double Y effect.

Dacia says this spring electric will be ideally suited for semi-urban, urban use and will be directed towards both fleet and private buyers. It is located below Dacia Sandero. It has a length of 3.37 m, width 1.57 m, height 1.48 m and wheelbase 2.4 m. Ground clearance is 151mm.

Both the variants are powered by the same battery and motor that produces 45hp and 125Nm. It has a claimed range of 305 km in the city and 230 km combined as per the WLTP cycle. It does 0-100 kmph in 19.1 seconds and a top speed of 125 kmph. Charging with AC charger is done in 4 hours whereas with DC fast charger, EV can be charged from 30 to 80 percent in 30 minutes.