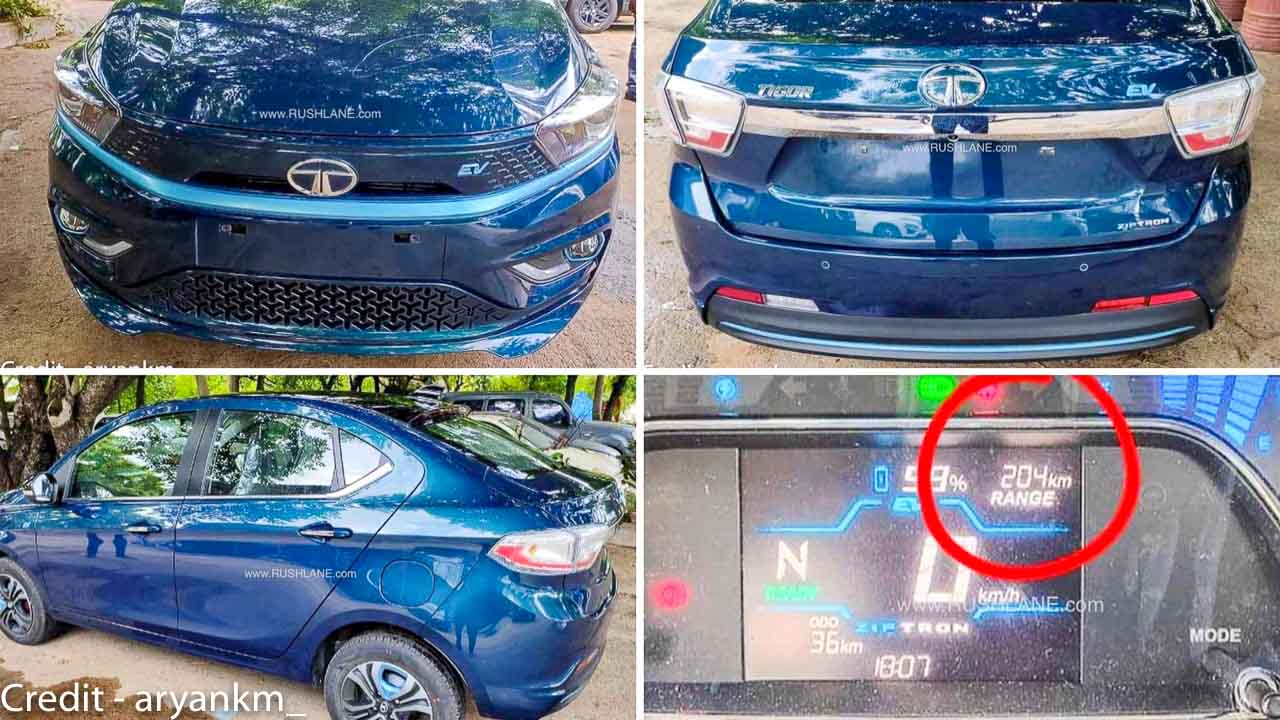 In the coming days, the second electric vehicle will be launched by Tata Motors for the passenger car market. The bookings for the 2021 Tata Tigor EV have officially started. Ahead of the launch on August 31, the all-new Tata Tigor electric sedan has started arriving at dealerships where it has now been spied on. Hat tip to automotive enthusiast Aryan Kimi for sharing exclusive spy shots on Rushlane Spylane.

The 2021 Tigor EV will get Tata Motors’ Ziptron technology, which is also seen in the case of the Nexon EV. Ziptron technology provides a permanent magnet AC motor that is paired with a lithium-ion battery. This battery pack is both dust and waterproof and complies with IP67 standards.

The Ziptron based Tigor will get a 300V permanent magnet electric motor which is an upgrade compared to the 72 V AC induction motor seen on its earlier counterpart. Tata Motors has confirmed that this technology will be related to a longer driving range of more than 300 kms or closer to 350 kms, but these figures have not been confirmed till date.

The Tigor EV gets alloy wheels with blue accents, LED DRLs on the front bumper and a similar design to the headlamp and grille as seen on the Nexon EV. The bumper will sport a triangular arrow pattern as is common on Tata vehicles.

Considering the fact that it gets some feature updates and an extended range would mean that the price could be increased from its earlier counterpart as well. However, the Tata Tigor EV will also take advantage of amendments to the FAME II scheme, which could put it in a highly affordable price range along with state government subsidies.

As seen in the case of the Nexon, the 2021 Tata Tigor EV will also support fast charging capabilities for added convenience. To put this in perspective, with Ziptron technology, the Nexon EV can be charged from 0 to 80 percent in just 60 minutes and can be charged via a home charger for 7-8 hours, which is comparable to the Tigor EV. But also expected.

Earlier this year, Tata Motors also introduced the XPres-T, which is a variant of the Tigor EV for the commercial/fleet segment. It has been introduced in two variants of XM + and XT + and its price is Rs 9.75 lakh and Rs 9.90 lakh respectively.

The Xpress-T uses a 72V motor with a 21.5 kWh battery pack that powers with Ziptron technology and has a great deal of range. Early last month, the model was open for bookings and with the rolling out of the first batch, deliveries to Garden Reach Shipbuilders & Engineers Ltd., Kolkata commenced.