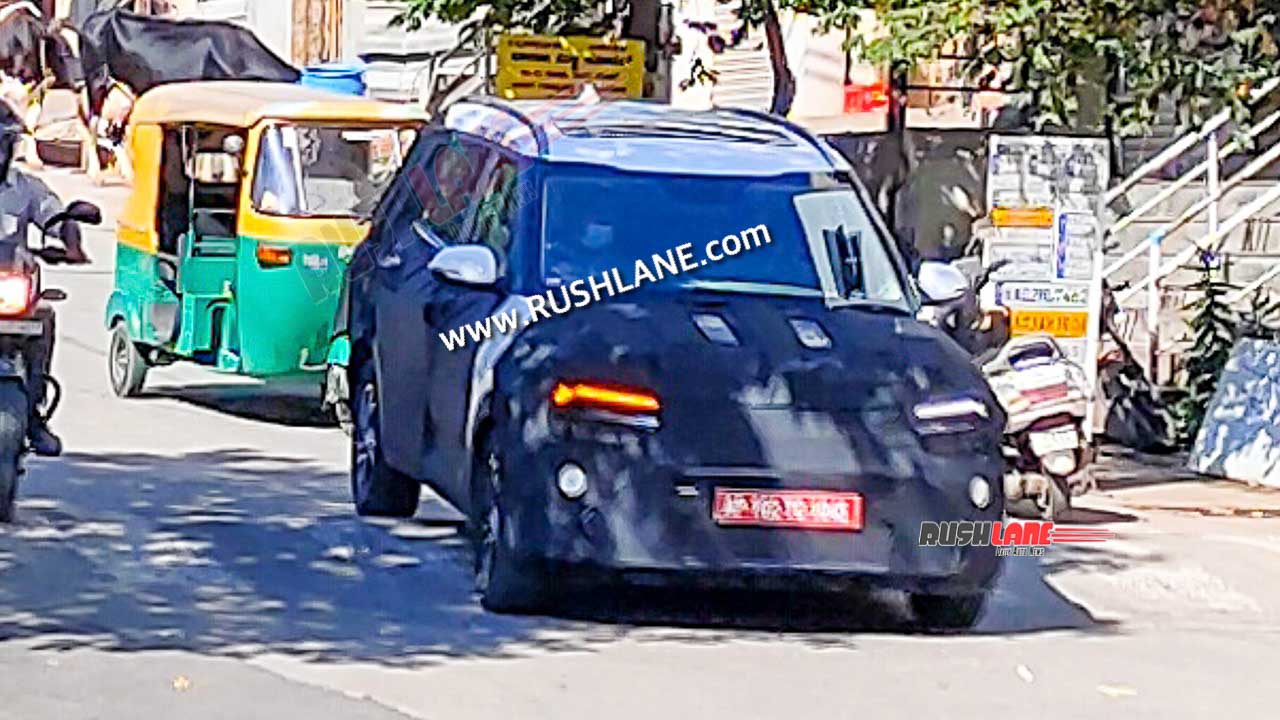 The new Kia MPV will rival the Maruti Ertiga and XL6 – it will be offered as 6 seater and 7 seater.

Ahead of its launch, the new Kia MPV codenamed KY has been spied again in a road test. The credit for the latest spy shots goes to automotive enthusiast Rahul Bhaskar, who caught the test mule on the streets of Bangalore. India will be one of the key markets for the Kia new MPV. The South Korean company plans to achieve 50k sales of the KY MPV in India every year.

With plans to export 26k units per year, overseas markets will also be targeted. The Kia KY MPV will be manufactured at the company’s plant in Anantapur, Andhra Pradesh. Presently the production capacity of this plant is 3 lakh units per annum.

Based on the Seltos platform, the Kia new MPV will borrow some styling bits like the tiger-nose grille. A prominent bumper can be seen at the front which houses a large air dam. Not much can be said about the finer design details, as all the test mules seen so far have been heavily camouflaged.

The Kia KY gets thick body cladding all around. The fenders have a circular design as compared to the square design seen with the Seltos. The MPV features sharp-cut machined alloy wheels, which enhance the road presence of the vehicle. This is expected to be a dominating front fascia. Roof rails and a large sunroof can be seen. At the rear, the silhouette feels familiar to the Seltos. To differentiate itself, the MPV may get a new rear bumper and tail lamps.

Being bigger and probably wider and taller, the new MPV will have enough room for all the passengers. The windows appear quite large, something that makes the MPV the preferred choice for sightseeing. The three-row MPV will be offered in 6-seat and 7-seat configurations. In the 6-seat version, there will be captain seats in the middle row.

The top-spec variants of the Kia KY MPV will be equipped with a sunroof. Like the Seltos and Sonnet, it will be a single pane electric sunroof and not a panoramic sunroof as seen on the Creta. It will also get UVO connectivity platform. Over 50 features can be offered spanning safety and security, remote access, convenience, navigation, AI voice commands and vehicle management. Some of the key features include stolen vehicle information and tracking, stolen vehicle stabilization, geofence alerts, SOS emergency and roadside assistance.

The new MPV is likely to be offered with both petrol and diesel engine options. It could borrow 1.5L petrol motor and 1.5L diesel motor from Seltos. The first makes 115 PS / 144 Nm while the diesel unit makes 115 PS / 250 Nm.

A 2.0-litre petrol engine could also be on offer. This unit is currently offered with cars like the Hyundai Elantra, Tucson and Alcazar. It produces 159 PS / 191 Nm. Both manual and automatic transmission options will be available.