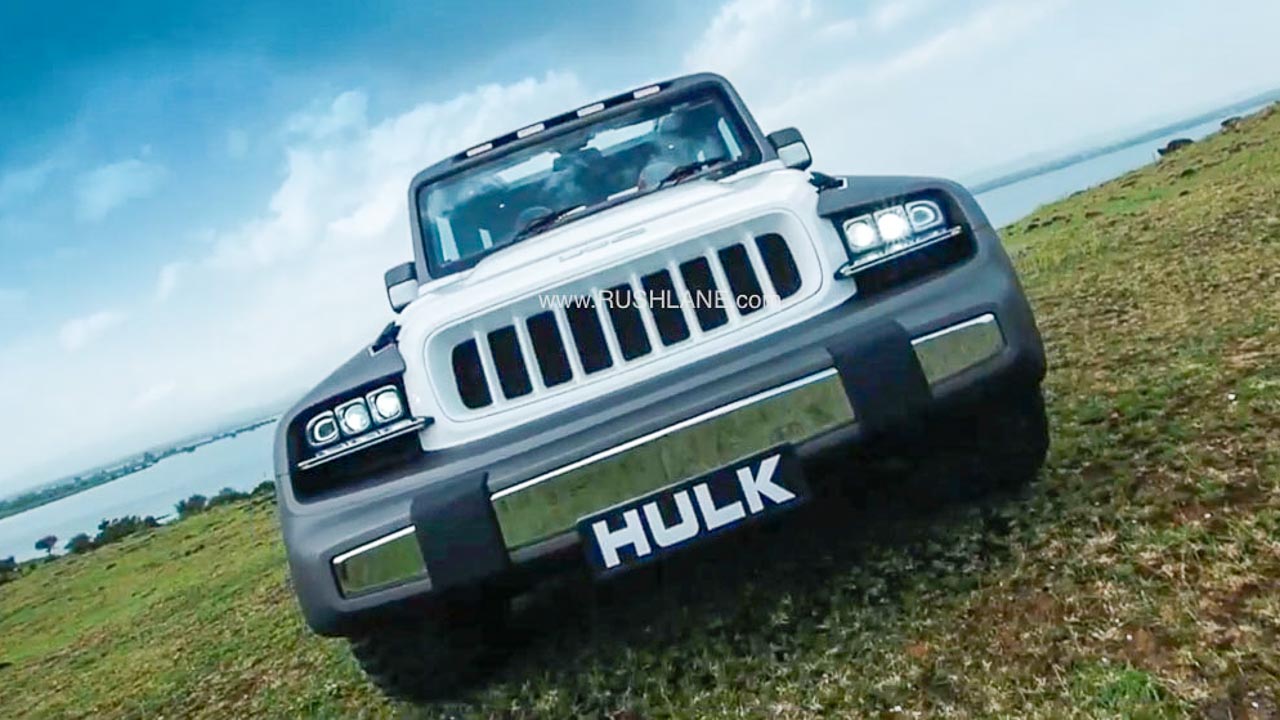 Although there are several iterations of Thar floating around the web, this is one of the few occasions that have been seen in the real world.

Since the launch of Thar, DC Design has come up with several renderings of the popular SUV. One of the most spectacular was the 6×6 version of the Thar. Earlier this month, DC had previewed yet another custom model of the Thar named Hulk. It seems legal now, as it has been seen in Andheri, Mumbai with a standard registration/white number plate. Thanks to auto enthusiast Mayank Kumar for sharing the video.

True to its name, the Thar Hulk has been replaced with a beef up ratio. The theme extends to the physical aspects as well as the high level of finesse, sophistication and luxury added to the SUV. The Thar Hulk gets a prominent front fascia with updated headlights, DRLs, grille, bonnet and bumpers. The Thar Hulk gets triple-beam LED headlights instead of the stock circular headlamps. Just below it are the sleek DRLs.

The vertically slanted grille looks familiar, but the number of bars and their shape and design have been updated. The front bumper gets a wide chrome stripe, which compliments the overall styling of the customized SUV. The bonnet has been updated with a more muscular looking unit that comes with air vents at the top.

On the roof, the Thar Hulk gets four additional LED lights. These red colored units look super sleek and need some attention on the roads. They also seem to be functionally relevant, being able to provide better illumination in dark or foggy conditions.

Coming to the side profile, the Thar Hulk gets huge fenders at the front and rear. The stock alloy wheels have been replaced with larger steel units with aftermarket dual-purpose tyres. The ground clearance is now higher than the standard Thar.

Apart from enhancing the visual profile of the car, these changes also improve the SUV’s off-roading capabilities. To provide for increased ground clearance, the modified SUV has been equipped with a retractable sidestep. At the rear, the Thar Hulk gets updated bumpers and taillights.

As already reported by DC, the Thar Hulk comes with updated interiors. Everything from the dashboard to the seats, upholstery and ambient lighting has been completely redesigned. The theme of the interiors resembles that of a premium sports car. The sunroof has also been updated to cover almost the entire part of the cabin.

The Thar Hulk is likely to use the stock engine options available with the SUV. The 2.2-litre diesel unit produces 130 Bhp of maximum power and 300 Nm of peak torque. The 2.0-litre petrol motor produces 150 Bhp and 300 Nm. Torque increases to 320 Nm with automatic transmission. Both engines are offered with either a 6-speed manual or a 6-speed torque converter automatic.

Share
Facebook
Twitter
WhatsApp
Previous articleRiya Chakraborty shared a selfie with her brother Shouvik, seeing this is the reaction of the users
Next article‘The news started pouring in from 9 am and…’ Vicky Kaushal’s reaction to rumors of engagement with Katrina Kaif
RELATED ARTICLES
Automobile