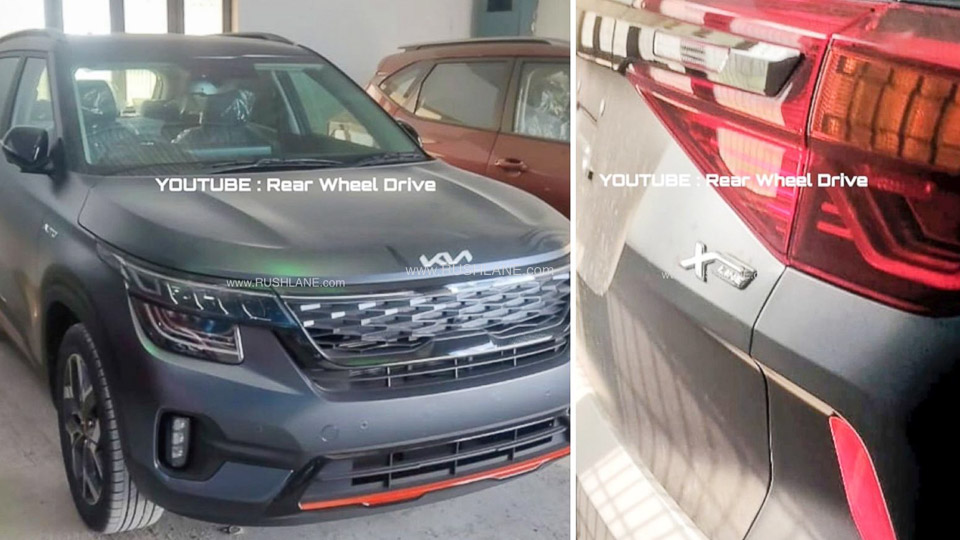 It may be recalled that Kia entered India in 2019 with its first car, the Seltos. It has become the fastest growing brand to reach the milestone of over 3 lakh units sales. The company added the Sonnet and the Carnival to its lineup, but the Seltos remains its best-selling model.

Now the Kia X-Line is about to be launched in the Indian markets to celebrate the company’s second anniversary. The Seltos X line is essentially a more rugged version of the existing Seltos. It gets some sporty exterior and interior feature updates. It will be launched before the Mahindra XUV700 and the new MG Astor.

The Kia Seltos X-Line was showcased as a concept at the 2020 Auto Expo. Now it is ready to be launched in India. Even before the launch, the compact SUV has started coming to dealer showrooms. Thanks to the Rear Wheel Drive YouTube channel, here are the first exclusive undisputed photos of the 2021 Kia Seltos X-Line Edition.

Exteriors of the Seltos X-Line will get black gloss body cladding, revised front and rear bumpers and new skid plates. It gets extensive black treatment on the grille along with chrome accents at the front and a chrome strip connecting the tail lamps at the rear.

It will wear a new matte graphite color scheme that will be exclusive to the LED headlight and tail lamps for the X-Line variant. The Kia Seltos X-Line will ride on a larger 18-inch alloy wheels against the 16 or 17-inch wheels seen on its standard counterpart. Kia has also added orange highlights along the front and rear and hubcaps for more sporty appeal. Prominent ‘Seltos’ badging is seen on its bonnet and tailgate as well as the ‘X-Line’ moniker on the front grille, doors and boot lid.

Most of the Kia Seltos’ X-Line interiors will be identical to the standard model. It will get the dark treatment from inside. Other features will be more or less the same as the current Seltos top variant.

It will get a 10.25-inch touchscreen infotainment system, 8-speaker Bose sound system, powered driver seating and a single-pane sunroof. Wireless charging and a heads up display will also be among the features offered. Security will be via 6 airbags, rear parking sensors, ABS and EBD etc.

The Kia Seltos X-Line will be powered by a 1.4-litre turbo petrol and a 1.5-litre diesel engine – which powers the regular Seltos as well. The turbo petrol engine will deliver 140 hp of power and 242 Nm of torque while its diesel counterpart will be capable of producing 115 hp of power and 250 Nm of torque. The engines are mated to a 7 speed DCT and 6 speed torque converter gearbox respectively. No manual transmission option is going to be on offer. Only automatic transmission options will be available with the Seltos X-Line.

The price of Kia Seltos X-Line could be around Rs 50,000 more than the current Seltos GTX top variant. It will rival the likes of Skoda Kushak, Hyundai Creta and soon launch SUVs like VW Taigun and MG Astor.