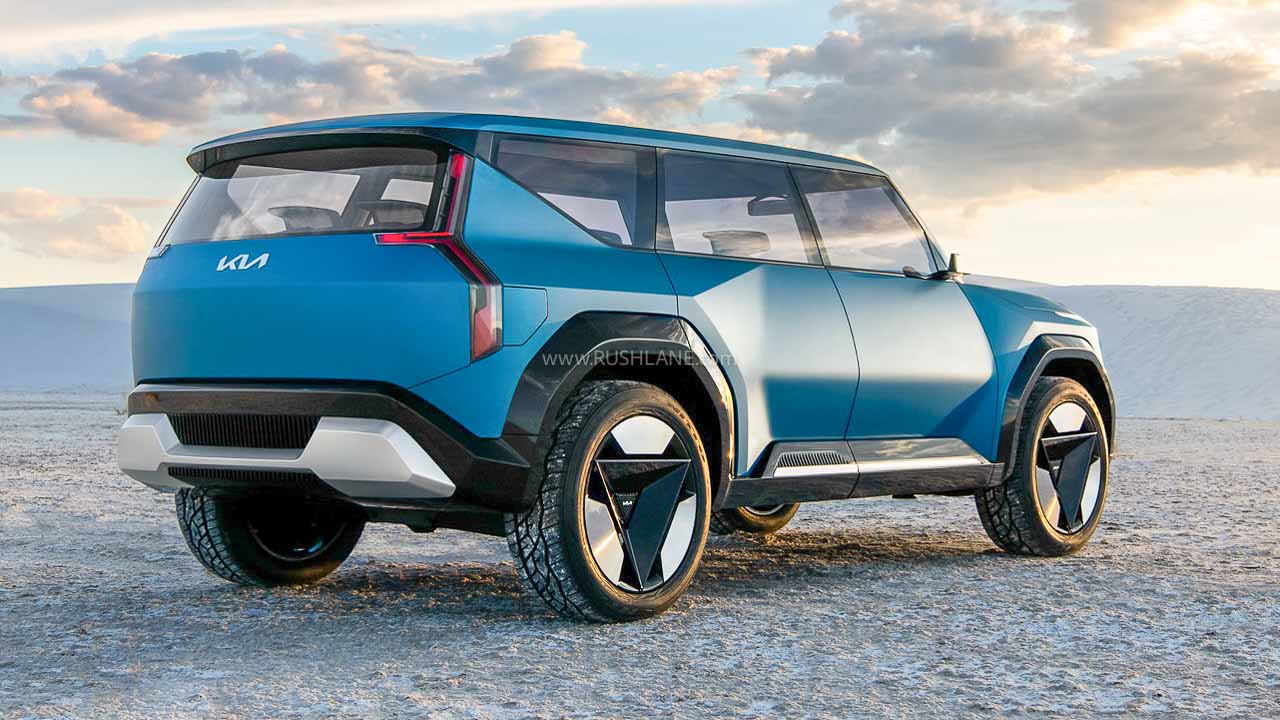 Kia has unveiled the EV9 electric SUV as a concept at the ongoing 2021 LA Auto Show. Cousin Hyundai also revealed a concept electric SUV called the SEVEN at the same show. Both these electric SUV concepts are expected to be the future production spec 3 row SUVs from the South Korean brands.

The Hyundai SEVEN and Kia EV9 full-size electric SUVs are similar in size to their existing IC engine powered flagships – the Palisade and Telluride. The Kia EV9 will sit on top of the EV6 electric car.

The resemblance is evident with a boxy silhouette similar to the Telluride which has been on sale in the US for two years. Furthermore, the slim L-shaped DRLs on either side of the front fascia, large wheel arches, a flat roof and straight proportions clearly resonate with the Telluride’s styling. The main difference, however, is with the closed-off front nose.

Small circular LED elements have been integrated into the holes on the front face which look very premium. The black colored pillars give a floating effect to the ceiling which enhances its aesthetics. On the inside, it has an interesting setup – with three seating modes; Activate, pause and enjoy. There is an ultra-wide 27-inch HD display for the driver.

The roof is dominated by a large glass sunroof. A slim cluster of LED taillights extends from the D-pillar to the rear fenders on either side of the tailgate. It is based on the same platform as the Hyundai Seven – Electric Global Modular Platform (e-GMP). The Kia EV9 measures 4930mm in length, 2055mm in width, 1790mm in height and 3100mm in wheelbase. Compared to the Telluride, it is shorter, but has a longer and wider wheelbase.

The EV9 is based on the same Hyundai Motor Group (HMG) E-GMP architecture that currently underpins the EV6. This architecture will host the upcoming electric models from both the Hyundai, Genesis and Kia brands including the Hyundai Ionic 5, Genesis GV60 and others.

In comparison to the IC-engine powered Telluride, the EV9 can be expected to be offered with an all-wheel-drive setup. While Kia has not revealed any details about the powertrain of the upcoming electric SUV, it could draw its power from a large lithium-ion battery with close to 100 kWh capacity. It will be available in both single- and dual-motor configurations, the latter offering AWD functionality. Kia claims that it will have a driving range of 480 km.

More EVs from Hyundai and Kia

Hyundai and Kia plan to introduce six electric cars by 2024. This is expected to start with the new Kia EV6, which is expected to be launched in India as a full import via the CBU route. This could be followed by the e-Niro electric SUV in 2023 which will be more mass-market in its appeal and take on the likes of MG ZS EV and Hyundai Kona EV.

Kia has announced that it will go carbon neutral worldwide by the year 2045. It aims to achieve full electrification in Europe by 2035 and in all major international markets by 2040. The South Korean automaker also reported that it will transfer all company fleet vehicles. for electrified vehicles by 2030.