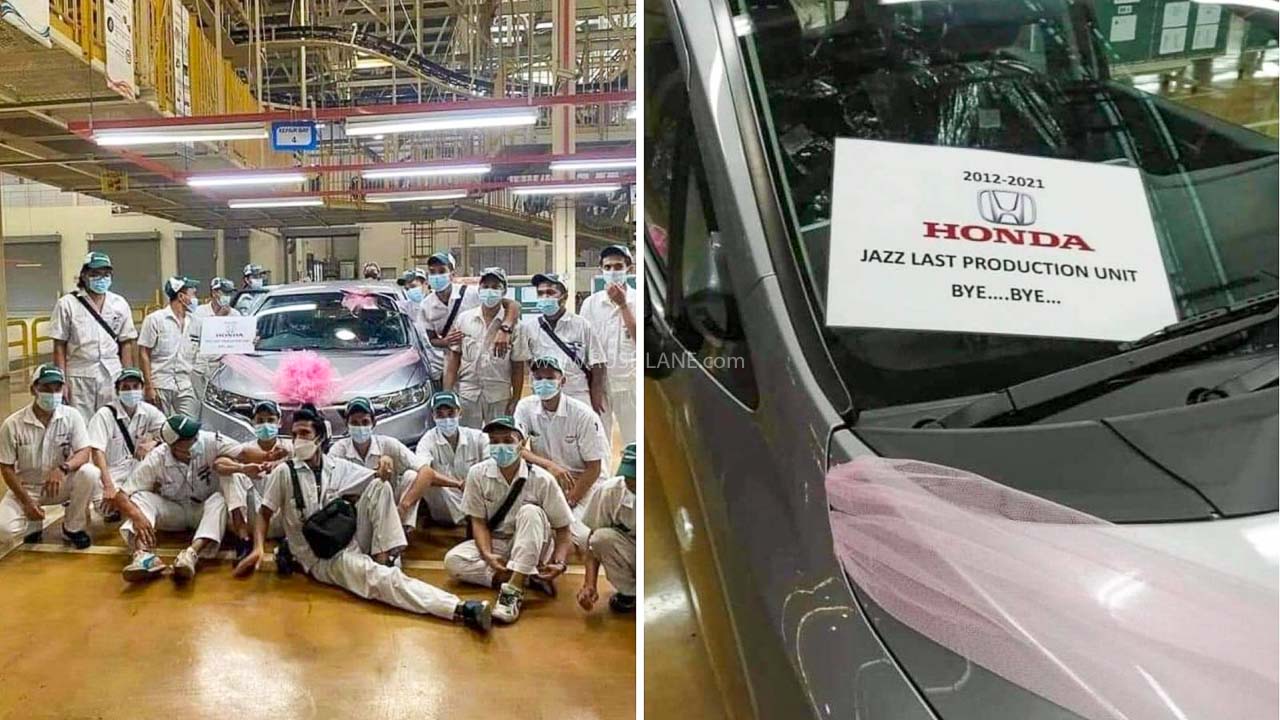 In India, the Honda Jazz competes with other premium hatchbacks such as the Maruti Baleno, Tata Altroz, Hyundai i20 and the Toyota Glanza.

After three generations and over 100,000 units sold, Honda has pulled the plug on the Jazz in Malaysia. Production of the premium hatchback in the country ceased with immediate effect and the final unit started at the carmaker’s local facility in Pegoh, Melaka.

Images circulating on social media show factory workers gathered around the Lunar Silver Jazz to take some pictures. Rumors of discontinuing the B-segment hatch have been doing the rounds in the Malaysian market for a long time and now the Japanese carmaker has finally put an end to the speculations by discontinuing it.

Honda plans to replace the Jazz in all South Asian markets except Singapore, with a sportier and possibly more affordable new-gen City hatchback. The car made its international debut last year and eventually sealed the Jazz’s fate. This means that the new-gen Jazz, which made its debut in Japan a few months ago, may not be offered in the South Asian markets.

The Jazz made its debut in Malaysia 18 years ago in 2003 and for the first nine years, it was available as a locally assembled CKD vehicle. The company launched the second generation model of the Jazz in Malaysia in 2012 which coincidentally became the first CKD car to be offered with a hybrid powertrain.

Powering the Malaysian-spec Jazz was a familiar 1.5-litre i-Vtec petrol engine that makes around 120 bhp and 145 Nm of peak torque. In Jazz, this unit is exclusively mated to a CVT automatic gearbox. However, the India-spec Jazz is offered with a 1.2-litre i-Vtec motor that makes 89 bhp and 110 Nm of peak torque. This engine is mated to a 5-speed manual or 7-step CVT gearbox.

Jazz is not a strong crowd puller in the Indian market as well as premium hatch unable to register four-figure monthly sales volume in the long run. However, there have been no reports of Honda discontinuing the Jazz in India.

The City hatchback is expected to be launched in Malaysia early next year and the engine specs are likely to be similar to that of its sedan sibling. It will be offered with two powertrain options – the standard 1.5-litre i-Vtec naturally aspirated unit mated to a CVT gearbox and an e:HEV hybrid unit. The latter has an electric motor producing 107 bhp and 253 Nm of torque which is mated to an Atkinson-cycled engine of 97 bhp and 127 Nm for a total system output of 124 bhp.

Share
Facebook
Twitter
WhatsApp
Previous articleVIDEO: Wamika Gabbi’s question to Ali Fazal – ‘What is the thing that is made of water but even the sun cannot dry it’
Next articleMahima Chaudhary exposed Bollywood, said – ‘They only wanted a virgin, who has never done anything…’
RELATED ARTICLES
Automobile