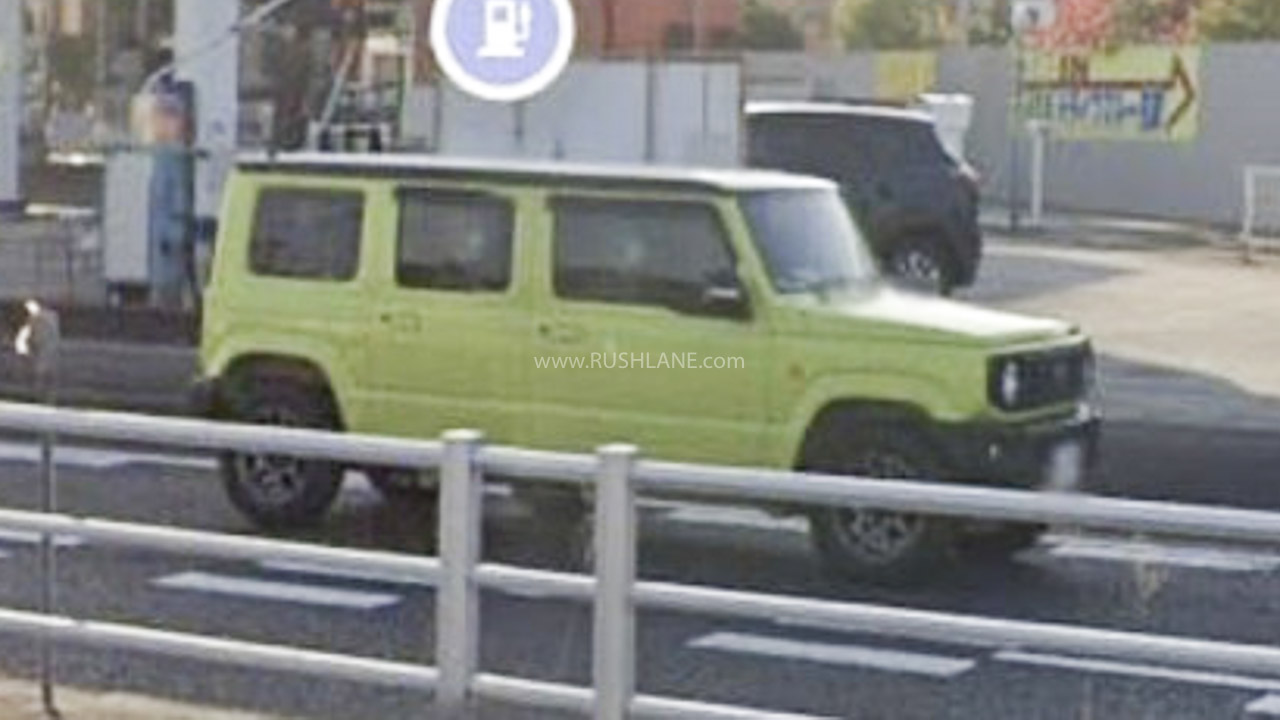 The Jimny 3-door has already been launched. India is already manufacturing the Jimny, but only for the export market. The made-in-India Suzuki Jimny SUV is exported to the markets of South America, Middle East and African markets.

The Suzuki Jimny Long Wheelbase Edition is set to be launched by the end of this year or early 2022. This H2 will make its way to India sometime in 2022. The 5-door SUV has been spotted on trial wearing camouflage over the past few months. Now, it’s the first time it’s been secretly spied on.

According to Kochpia, the picture of the Suzuki Jimny 5 Door SUV was captured in Google Street View. Hat tip to automotive enthusiast Kaustubh Nagvekar for sharing this at RushLaneSpline. Spotted in the lime green shade, this is the same shade that is also seen on the 3 door Jimny which is currently on sale in several countries. The unassuming Jimny 5 door as seen in Google Street View matches in size/dimension with the camouflage version of the earlier spy shots.

This would mean it would have a wheelbase and an increase of 300 mm in overall length – compared to the 3-door Jimmy. This additional length will provide more interior space and leg room for the rear passengers. Despite the longer wheelbase it will still be a sub 4 meter SUV to avail some tax deductions in India.

Apart from its increased dimensions, the 5 door Jimny is similar to the current Jimny with round LED headlamps and clamshell bonnet. It also gets angled bumpers, distinctive wheel arches and rear combination lamps. It will also get a redesigned front grille with a single horizontal slate in place of the 5 slate vertical set seen on its current counterpart.

For India, the Jimny will be powered by a 5-door 1.5-litre petrol engine. This is the same 1.5-litre petrol unit that is currently available on the Ertiga, Ciaz and Brezza. It gives power of 102hp and torque of 130Nm. The engine is mated to a 5 speed MT or a 4 speed AT. However as of today there is no mention of 4WD or AWD.

Suzuki also has a 1.4-litre turbo petrol, Boosterjet engine in its international lineup along with a 48V mild hybrid system. This engine currently powers the Vitara SUV and Europe-spec S-Cross. The international-spec Jimny 5-door will also be offered with an AWD setup.

Once launched, the price of the Jimny 5-door could start from a base price of around Rs 10 lakh. It will rival the Mahindra Thar and Force Gurkha and will also compete with other compact SUVs within the same price bracket.